“Igbo Presidency Is A Must”- Ohanaeze Ndigbo 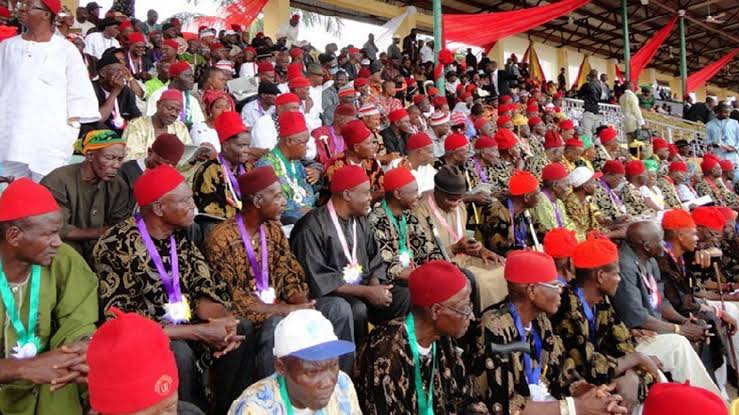 Ohanaeze Ndigbo Apex Igbo socio-cultural organization, has declared that it would not be intimidated into surrendering its demand for a Nigerian President of Igbo extraction in 2023.

This was contained in a statement issued by Mazi Okechukwu Isiguzoro, Secretary-General, Ohanaeze Ndigbo Worldwide.

He was reacting to what he called “sponsored threats and vituperative rhetoric of two Northern gangs, the Gan Allah Fulani Development Association (GAFDAN) and Myetti Allah Kautal Hore”, describing them as “empty, baseless and the last kick of dying horses.”

The Ohanaeze scribe said the separate threats against the Southern Governors by the said groups “were sponsored by Northern Politicians to arm-twist the people against ensuring an end to the continuous herders-farmers clashes.”

He alleged that “murderous and killer herdsmen had craftily designed to take advantage of grazing routes to perpetrate heinous onslaughts on the indigenous people of Southern Nigeria”, warning that such move would be resisted jointly by all ethnic nationalities groups of the South.”

“The separate interviews of the two Northern organizations at the same time and on the same day, threatening the reversal of the Open Grazing Ban, citing 17 million votes of Fulani against Power Rotation to South, destruction of personal businesses, and threats to Nation’s Unity, shows the ignorance of the Fulani Groups, exposed their insensitivity to the plights of the Northerners on insurgency.

“Ohanaeze Ndigbo also condemns vehemently the attacks on the Alfa Jets by bandits between the boundaries of Zamfara and the Kaduna States which should be a source of anguish for the Gan Allah Development Association and Myetti Allah Kautal Hore.

“It appears that the current persuasive threats and blackmails of the groups are based on sinister motives to destabilize the peaceful atmospheres of Southern Nigeria and citing the Benue crisis where open grazing ban was implemented shows that both leaders of Fulani organizations might be behind the reckless massacres of the people of Benue State and should be questioned by security agents as preventive measures to avoid a repeat of the Benue Massacre in Southern Nigeria,” Ohanaeze added.

Related Topics:Ohanaeze Ndigbo
Up Next