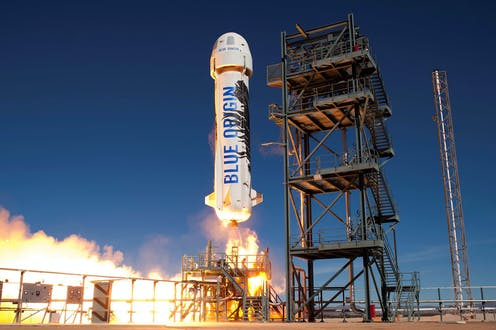 Jeff Bezos rocketed past the edge of space Tuesday, launching from the improbable spaceport he has built in the West Texas desert here and fulfilling the lifelong dream of a die-hard Trekkie who was transfixed by the Apollo 11 moon landing and has pledged to use his fortune to open space for the masses.

Lifting off at 9:12 a.m. Eastern, the New Shepard rocket that Bezos’ Blue Origin space venture has been developing for years carried one of the of the most unusual astronaut crews ever to depart Earth. In addition to Bezos, on board the capsule were Bezos’ brother, Mark, Wally Funk, an 82-year-old aviation pioneer and Oliver Daemen, an 18-year-old student from the Netherlands who lucked into the flight when the winner of an auction for the fourth seat had to postpone. (Bezos owns The Washington Post.)

The launch set a record for both the oldest and youngest person to fly to space, and came nine days after Richard Branson flew on a similar suborbital trajectory. The back-to-back launches amounted to yet another sign of space exploration’s modern renaissance, a movement that is being fueled not by nations but by a surging commercial space industry backed by billionaires.

Related Topics:Jeff Bezos
Up Next

Runtown And Girlfriend Allegedly Break Up