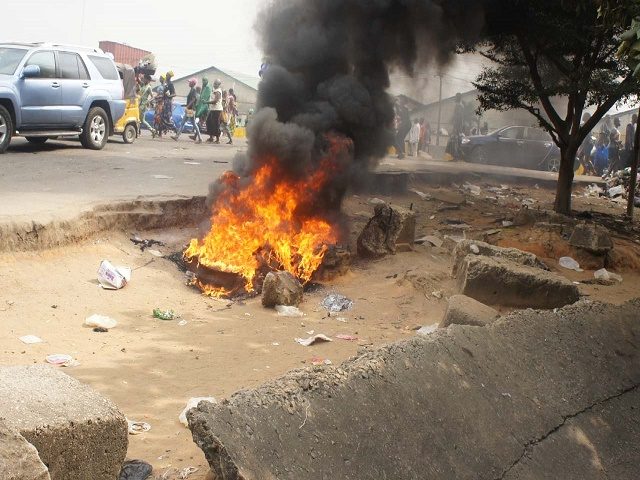 A group of angry mobs on Monday evening meted out jungle justice on three suspected motorcycle thieves in Ayobo area of Lagos state.

An eyewitness who spoke on the condition of anonymity said the suspects took to their heels after allegedly stealing the motorcycle.

“Some commercial motorcyclists ran after the suspected thieves and caught up with them along Koloba Road, off Alaja Road, Ayobo, Ipaja, Lagos.

“Two were initially caught and were instantly lynched to death, while the other one scampered for safety.

“He was later caught in one of the streets in Alaja and wheeled down to join the other two before they were set on fire.

“The thieves also injured some people while they tried to escape.

“Those who were injured have been rushed to an undisclosed hospital for medical attention,” the witness said.

Officers of the Lagos police command have been drafted to the scene of the incident.

Meanwhile, the state’s police command has said it had deployed adequate human and material resources to different parts of the state in preparation for a hitch-free Eid-el-Kabir celebration.

The Commissioner of Police in Lagos State, CP Hakeem Odumosu, gave the assurance in a statement signed by the Spokesman for the command, CSP Olumuyiwa Adejobi.

Odumosu said that the command had strategised and fortified security across the state before, during and after the festive period.