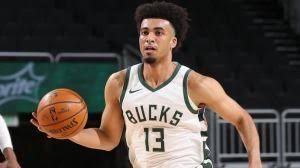 Two Basketball stars who are Nigerians Giannis Antetokounmpo and Jordan Nwora won the franchise’s first NBA championship in 50 years with the Milwaukee Bucks, a cruising to a 105-98 win over the visiting Phoenix Suns on Tuesday night.

Exactly three weeks after suffering a knee injury that appeared to put his role in the Finals in doubt, Antetokounmpo carried Milwaukee to their first championship in half a century.

However, Nwora didn’t feature in the final.

With the victory, the Bucks clinched the NBA Finals 4-2 and became only the fifth team to win the best-of-seven championship series after losing the first two games.

The ‘Greek Freak’ delivered arguably the best performance of his career at the best possible moment and now can add an NBA Finals MVP award to his two regular-season MVP trophies. Just as Kareem Abdul-Jabbar led Milwaukee to their first championship in 1971, the 6ft 11in Antetokounmpo made sure a big man also carried the Bucks to their next title.

Antetokounmpo was an easy choice for the Bill Russell Finals MVP award after collecting 50 points, 14 rebounds and five blocks. He had at least 40 points and 10 rebounds in three of the six games in this series.