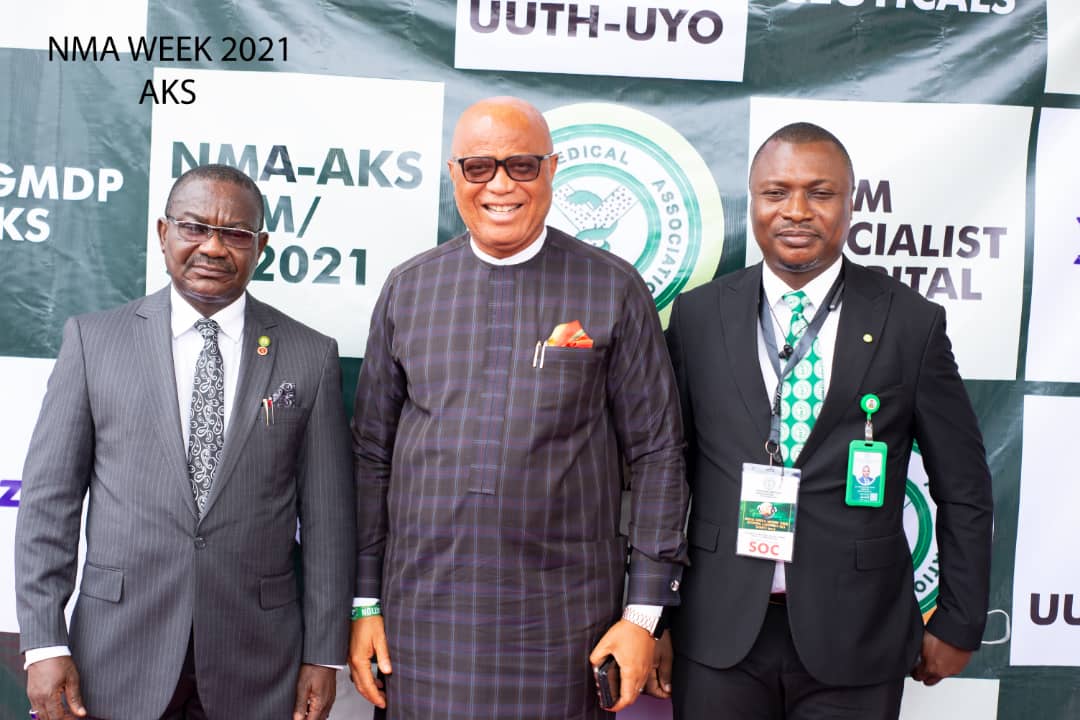 The Nigerian Medical Association, NMA in Akwa Ibom State has commended the state commissioner for lands and water resources, Pastor Umo Eno for his sacrificial role even as a private citizen in helping to save lives during the last wave of the COVID-19 pandemic.

The state chairman of the NMA, Dr. Ime Sylvester Udoh gave the commendation just as Pastor Umo Eno charged the association to help reverse the negative portrayal of doctors as cast in Nollywood movies.

The two spoke at the opening ceremony of the 34th Annual General Meeting and Scientific Conference (AGM/SC) of Akwa Ibom State Branch of the Association.

While welcoming Pastor Eno who was the chairman of the occasion, the NMA chairman, Dr. Udoh commended some prominent Akwa Ibom people, especially Pastor Umo Eno for their support to the association especially during the CIVID 19   pandemic.

Dr Ime noted that the choice of Pst Umo Eno as their Chairman was in recognition of his continuous support to the body, saying “when you look through the profile of our Chairman, it readily becomes very evident why he was specially chosen to play this role – the congruence in values.

“Colleagues, permit me to give your memory a little task. Recall that at the height of the 1st wave of the COVID-19 pandemic, Pst Umo Eno, as a private citizen, which he then was, was one of the few who came to the aid of NMA by donating personal protective equipment which the Association shared to members. Sir, Your gift saved lives- the lives of Doctors and their patients alike,” he added.

He also commended Governor Udom Emmanuel for always coming through for doctors in the State and beyond and prayed for God’s blessings upon the Governor and his family.

Pastor Umo Eno in his address to the doctors called for a serious reorientation of the public and partnership with the Nigerian film industry, Nollywood to erase scenes depicting the profession in negative light out of their storylines.

He thanked the NMA for their sacrifices  since the outbreak  of the COVID-19 pandemic stressing that medical practitioners were at the forefront and contributed immensely in the fight against the pandemic.

The Commissioner appreciated NMA for standing by the Governor in the fight against the dreaded COVID-19 pandemic adding that without the God given wisdom on the medical practitioners, it would have been disastrous for humanity.

He recounted with admiration, the conviviality of medical doctors at the isolation centres and generally, in attending to their patients, emphasising that doctors are truly the people’s friend.

Pastor Umo Eno Called on the NMA to continue to partner with Government and support the Governor Udom Emmanuel-led administration to achieve his  Completion agenda.

While commending the association for choosing him as Chairman on the occasion despite his lack of medical experience, he reminded them to remain tenacious to their Hippocratic oath.

Editors Flay NBC Over Order To Stop Reportage Of Insecurity