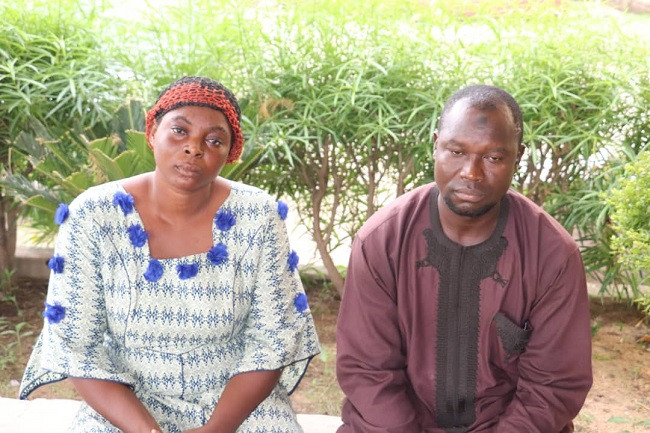 A 31-year-old woman, Sadiya Ibrahim Umar alongside her husband, Mohammed Mohammed, have been arrested by the Niger State Police Command for staging a fake kidnap.

The lady was reported to have conspired with her husband to fake her kidnap and in the process extort N1 million from her father.

Spokesperson of the Niger State Police Command, DSP Wasiu Abiodun, who disclosed this in a statement in Minna on Friday, said that the couple who reside in Chanchaga Local Government Area of the state was arrested on July 22, in Limawa area of Minna metropolis.

The PPRO said Sadiya was reported to have been ”kidnapped” on July 15, on Old Airport Road in Minna after she had closed from work.

“On 15/07/2021 at about 1200hrs, the said Sadiya was reported to have been kidnapped by unknown person(s) having boarded a tricycle at Challenge junction, Maitumbi in Bosso Local Government Area of the State going to Old Airport road Minna after closing from work at Umar Bin Khattab International School Maitumbi,” he stated.

“On 16/07/2021, the father of the said Sadiya Ibrahim Umar was contacted by an unknown caller demanding for N5million ransom which was later reduced to N1million and was dropped at a location in Rafin-Yashi, within the council area (Bosso LGA) on the outskirts Minna for the anonymous caller

“During interrogation by the Police, she confessed to having conspired with her husband ‘Mohammed’ the first suspect to fake her kidnap and she was taken to Nugupi village via Paiko in Paikoro Local Government Area of the state, where she was kept by her husband at his friend’s place.”

The husband also confessed to have given his mobile phone to a friend named, Abdullahi, who negotiated and collected the ransom.

The police spokesperson said that efforts were still on to nab Abdullahi, and following which, the suspects would be arraigned in court.

“This is the third of its kind in recent times where such crimes were faked, assuring that “the Police will always be on top of every situation to guarantee security of lives and properties of Nigerlites.”