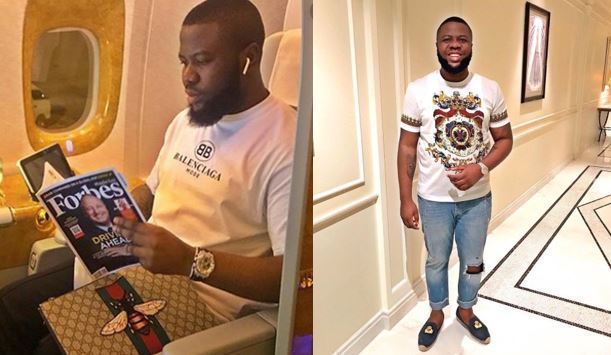 Mo Abudu’s EbonyLife TV, Universal Pictures, and Will Packer Productions have been given the nod to produce a film centred on criminal enterprise of renowned fraudster, Ramon Abass, also known as Ray Hushpuppi.

The outfits received the adaptation rights for the movie whose plot harped on the rise of Hushpuppi in his fraudulent endeavours and his eventual fall.

The production houses agreed to make a movie on the International fraudster, based on a Bloomberg story, “The Fall of the Billionaire Gucci Master.”

According to The Hollywood Reporters, an untitled action thriller movie project has been set up at Universal Pictures, following the collection of the adaptation rights for the movie.

The movie will be based on a Bloomberg story by Evan Ratiff which detailed how Hushpuppi carried out an internet scam and how he was nabbed by International police.

Will Packer Productions is known for producing popular movies like Girls Trip and Night School.

“Ten months ago Mo pitched us a rich and entertaining concept steeped in Nigerian culture that can only be told with the help of her unique perspective. Together we knew Evan’s work was the definitive telling and the perfect anchor of this saga,” Will Packer said in a statement.

“We understand the environment of poverty and deprivation that breeds highly talented and fundamentally flawed characters like Hushpuppi, and WPP knows how to create stories with global appeal,” Abudu added in her own statement.

Hushpuppi, who commands millions of followers on social media, especially on Instagram, is popular for his ostentatious lifestyle and brazen display of questionable wealth.

Eleven other suspects were detained during the coordinated early morning raids in an operation comprised of officers from the FBI, Interpol and Dubai police. Detectives seized more than 150 million dirham (£30 million) when they swooped on his Dubai apartment as he slept.

Investigators allege that Hushpuppi, a former second-hand clothes trader in Lagos, used his Instagram account to project a billionaire’s luxurious lifestyle to attract followers and lure in potential victims.

Officers say they found the email addresses of nearly two million victims on dozens of phones, computers and hard drives. More than a dozen luxury cars were seized in the raid along with suitcases full of cash.

Crisis Breaks Out In Borno Over Demolition Of Church Building