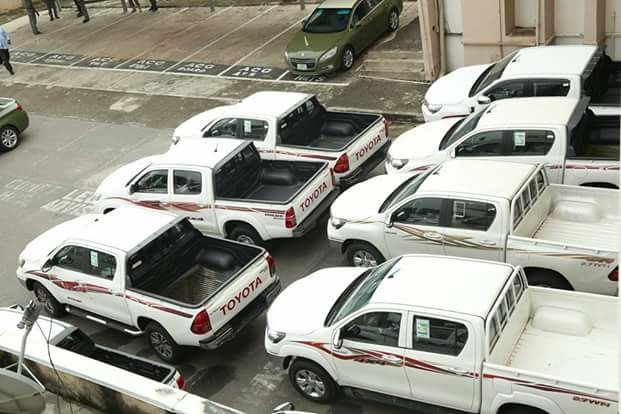 Galadima said this during an interactive session with the House of Representatives Committee on Customs and Excise Duty on Tuesday in Abuja.

According to him, “unfortunately, the big men today in Nigeria, I didn’t say National Assembly members, all their escort Hilux are smuggled vehicles”.

He said that any officer involved in allowing such smuggled cars were being penalised and punished by the service.

Galadima stated that though, the number of Hilux importation had dropped, hundreds of them were still in town.

Earlier, the Chairman of the Committee, Rep. Leke Abejide, disclosed that they were working towards repealing some provisions in the Customs and Excise Management Act, to reduce the cumbersome process of containers transfer in the agency.

He also told the customs delegates that the committee was proposing three stages for the transfer of containers which includes, Controller, DC revenue and Exit.

“One of the reasons we are doing this interactive session is because we are already working on the Customs and Excise Management Act.

“We want to have an agreement with Customs on a common ground, like all these transfer process, it is going to be there.

“So when the Act comes, we are going to sit down and look at it and see how we can help them. We are working on the Act,” he said.

He stated that Customs were short of workforce, stressing that when the committee went out to the command, the complaints were that they were short of men.

According to him, Customs was supposed to be 30,000 men, but they are 15,000, they cannot recruit the remaining 50 per cent unless they have money.

“Customs is underfunded, they are taking seven per cent of duty on items, this cannot help Customs to recruit. This is one of the things we are doing”.

Related Topics:CustomsSmuggled cars
Up Next