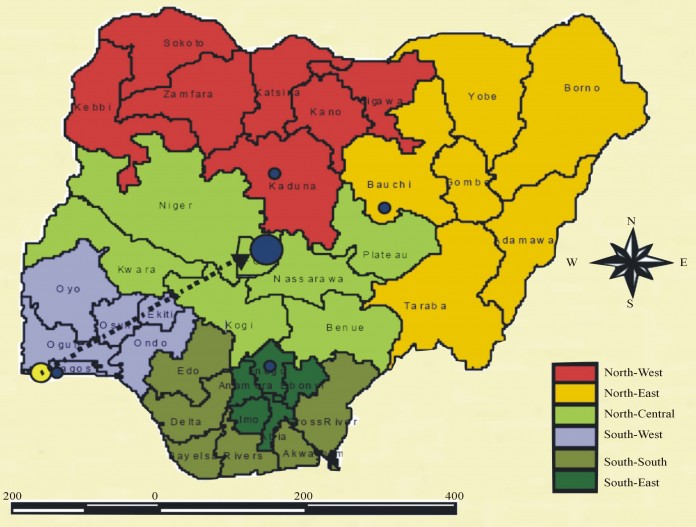 Thousands of armed terrorists from the North West (NW) and North East (NE) of Nigeria have been killing, kidnapping for ransom, destroying property/ farmlands etc., across Nigeria. Amid the deadly activities of these groups, certain events have made the current situation an existential threat to the Middle Belt (MB) and Southern Nigeria (SN).

The Federal Government (FGN) has not been able to resist or stop the activities of these Terrorists/Bandits, and FGN has not shown sincerity and genuine willingness to fight them despite the wanton killing and destruction of lives. These Terrorists have massively infiltrated the MB & SN, and taken over the forests/ farms. These are deadly armed Fulani Herdsmen, Fulani Militias and Terrorists (Boko Haram, ISWAP, Bandits, Al-Qaeda etc.).

Remarkably, this is happening as a section of the country from NE & NW dominates the Federal Security architecture through nepotism and gross violation of Federal Character Legislation.

This section of the NW and NE currently head 10 out of the 14 core security positions in Nigeria, while the South head just 4 out of which 2 are inconsequential. All the 10-security positions appointed from the North are Northern Fulani Muslims and collaborators.

Fulani Herdsmen, Fulani Militias and Terrorists, are killing and displacing the Christian communities in the MB section of the North. Unfortunately, the FGN has deliberately excluded the MB people from all strategic security positions.

The FGN is deliberately disarming SN indigenous people as previously done to the MB in 2017 before the ongoing ethnic cleansing against the people starting from January 2018. The FGN has refused to grant the Southern Governors license to acquire appropriate weapons for the State Securities (Amotekun, Ebubeagu, Benue Forest Guide etc.) to secure lives and properties.

FGN and Northern Governments continue to appease and release so-called repentant terrorists. Also, one of the senators representing Borno, said that the Nigeria Military and Police Armories, are the source of most of the weapons used by the terrorists. Due to the attack by these terrorists, over 70% of farmers in MB & SN have abandoned their farms, and a systemic Starvation War is ongoing against SN & MB.

How do we stop the ongoing genocide in the Middle Belt and secure the South if the over 100,000-armed Terrorists/ Bandits/ Fulani militias mobilised to the South? The over 100,000-armed Terrorists/ Bandits/ Fulani militias are currently carrying out genocide in the MB (Southern Kaduna, Plateau, Benue, Taraba, Kogi, Adamawa etc.) as they head towards the South. The easiest way to destroy the South is to ensure the South has no weapons or security forces that could resist any major invasion, attack, or declaration of war by these terrorist groups.

Arming non-state actors or relying on community-based vigilantes alone without formidable state security forces armed properly is insufficient to save the MB & SN from impending doom. The violent attack on non-state actors trying to protect communities in the SN and MB by the FGN will not allow such a group to survive.

After the Sunday Igboho attack episode, the Southern people should look forward to similar attacks on community-based vigilantes. On the 10th of July 2021, shortly after the attack on Igboho, an IGP squad from Abuja stormed Omu- Aran in Kwara State arrested about fifteen youths over allegations that they destroyed a Fulani camp. The arrest was the FGN’s clampdown on the communities following the destruction of Fulani Kidnappers camps in Kajola, Odo-Owa, and a Hotel in Omu-Aran in April.

A similar attack on Ibarapa vigilantes may be in the offing following the exchange of guns between the community vigilante/ Amotekun and invaders dressed in Customs uniform a few weeks ago. While the Nigerian Customs claimed responsibility for the invasion and sporadic shooting resulting in the killing of three innocent persons in five Ibarapa towns, the basis for the unprovoked killing and the prosecution of the alleged officers involved has not been done.

The Northern Controlled Nigerian Customs has described the innocent people killed, including the vigilante and Amotekun, as criminal elements unlawfully bearing arms and unleashing same on officers on legitimate duties. Is this a preparatory work for a clampdown on defenceless vigilantes/Amotekun helping to prevent the attacks by Fulani Herdsmen and Militia in Ibarapa?

Similarly, in the first week of August, suspected Fulani Terrorists attacked ten communities in Bassa Local Government Area of Plateau State killing, about 40 persons. While the community leaders alleged that the security forces in the area did not stop the carnage, no single suspect was arrested ten days after the killing?

However, suspected Irigwe locals were accused of killing 22 Fulani Persons on the 14th of August while burying their people killed by suspected Fulani Militias. Surprisingly, within 3, days the Federal police have arrested 33 suspects from the indigenous people.

The persistent refusal or failure of the Federal Police and Military to maintain fairness, apprehend Armed Fulani Killers and protect indigenous communities in the MB & SN will continue to necessitate self-help, reprisal attacks, etc. which in turn will open the door for a pre-meditated, dis-proportionate, and heavy-handed extrajudicial destructions of peoples and communities across the MB and SN by Fulani controlled Police and Army.

Whichever way, the MB & SN people are being destroyed. The strategy is clear, eliminate and disallow any means of resistance from MB & SN, while the destruction by Terrorists, Bandits, Armed Fulani Herdsmen etc., continues. The greatest calamity ever is for the MB & SN people and their Political Leaders to fold their hands and opt for suicide by not setting up and arming state government-sponsored security outfits to secure their regions. THIS IS SUICIDAL!

Any prospects of freedom for the South; be it separation from Nigeria, return of presidential power to the South, restructuring of Nigeria, United Nations-backed referendum etc. are most likely impossible if the South does not have a means of defending its states/ boundaries/ territories in the case of the current systemic attack, or future massive invasion or a full-blown civil war.

If the aggressors declare war against the SN & MB, no referendum, secession, or self-determination can happen until the MB & SN can over-power the aggressor and hold their territories.

The way forward is to ungently convoke the Middle Belt and South Security Summit (MASSES) to drive home three mandatory life-saving measures. These measures are well within the remit of the State Governors/House of Assembly and the collective determination of the over 100 million indigenes of the MB & SN. The strong resolve of the people behind these mandatory measures must be demonstrated by mobilising all stakeholders (Professional, Religious, Ethnic Nationalities, NGO, Political, Socio-Cultural organisations etc) in the MB & SN behind the goals through the mega summit (MASSES).

Thirdly, to constitutionally empower the State Governments to deliver on the two projects, demand a convocation of MB & SN States “Security Referendum” witnessed by regional and international organisations such as AU, EU, UN etc.

The proposed MASSES will achieve the following benefits to the MB & SN:

Do you want the killing of Benue, Taraba, Plateau, Adamawa, Southern Kaduna, Nasarawa, Ebonyi, Enugu, Edo, Oyo, Kogi, Ogun Delta, Akwa Ibom, Rivers etc. people to stop? If your answer is yes, we invite every honest and patriotic people (indigenes or peaceful dwellers) in the various MB and SN communities willing to enlist in this laudable project to join other patriots in the CEBOG & CEFASS through the links/contacts below:

The Blood Of Jesus