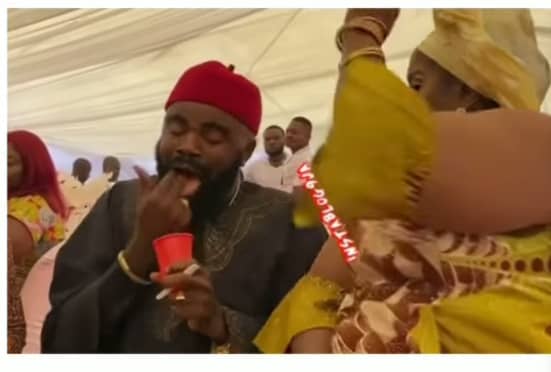 The occasion and venue remain a mystery, but Nigerians and fans of Nollywood the world over are nevertheless roiling in laughter after a hilarious video of popular comedian Longinus Chief Imo relishing a portion of ice cream seated beside Rita Edochie went viral.

In the video, apparently at a wedding ceremony, Chief Imo is seen recklessly relishing his cup of ice cream with a spoon and as the cream finishes he applies his fingers causing a bemused Rita Edochie to pat him for turning himself into an embarrassment.

Instablog Nja shared the hilarious clip of the moment actress, Rita Edochie, gently reminded her colleague, Longinus, that he was in public.

GreenWhiteGreen GWG gathered some reactions of the encounter between Chief Imo and Rita Edochie.

Trust me Chief Imo did that on purpose ????

@p.j_dbarber they will tell you that okro no dey grow pass him owner. ?

Mumu for film still mumu for real life . No be juju be that ????

He knew he was gonna get scolded, he looked at her briefly to weigh his punishment before he dipped his fingers in the cup??

????? my mama go still beat me again when we reach house

Growing up I think we are all guilty of this in public / behind closed doors. ??

Rita be like “You can’t disgrace me ???… how can you sit next to me and be behaving like hoodlum? ?