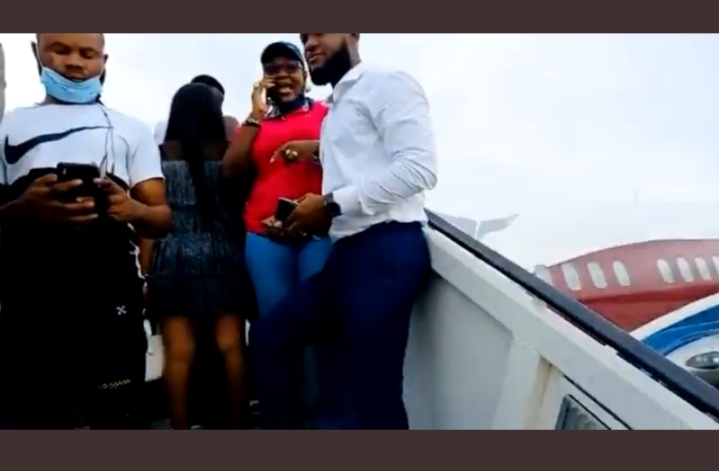 Nigerians have been reacting after a video of passengers of an Arik Air plane deplaned to allow the pumping of gas for an apparently malfunctioning air cooling system in the aircraft.

The video of the incident which apparently happened on Monday was shared by Senator Shehu Sani early on Tuesday and was being given as an example of the lack of maintenance culture in the country.

The passengers in the video were seen on the airstairs of the Arik Air plane, Queen of Angels patrolling about as gas was pumped into the cooling system of the aircraft.

GreenWhiteGreen GWG reports that Arik Air which was started in 2004 by Sir Michael Arumemi-Ikhide but taken over by the Assets Management Company of Nigeria, AMCON in 2017 arising from contentious debts said to have been incurred by the company.

Senator Shehu Sani shared the video of the incident.

Reacting to the development of the Arik Air plane being deplaned to allow refill of cooling gas, twitter users said:

Same way Nigerians are waiting for buhari to pump gas to the economy. Nigerians have no where to rush out of the heated economy.

Wow. That’s great. At least our nation is growing. You can’t see this anywhere in the world. Nigeria is a great nation from the back.

Things like this happen occasionally (which is very normal in Nigeria) cause we have poor maintenance culture.

I pray fuel no finish while airborne, ask them to check that too

Wow. That’s great. At least our nation is growing. You can’t see this anywhere in the world. Nigeria is a great nation from the back.

Efforts to get the reaction of Arik Air on the deplaning of passengers to allow refill of cooling gas were unsuccessful.