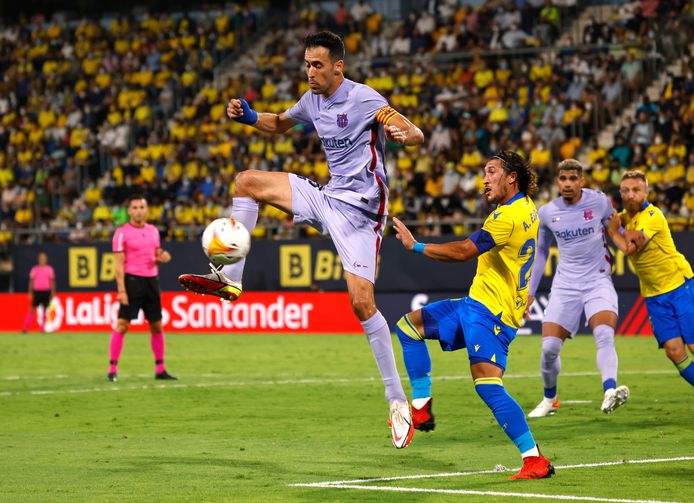 The pressure on Ronald Koeman intensified after his FC Barcelona side were held to a dire 0-0 draw by Cadiz at Estadio Nuevo Mirandilla on Thursday.

Speculation about the Dutchman’s future has been rife following a slow start to the LaLiga campaign.

The sluggish start had seen Barca drop points to Athletic Bilbao and Granada in their opening four games, while also losing 0-3 to Bayern Munich in the UEFA Champions League.

Things did not get much better for the Catalan giants in Andalusia as Cadiz comfortably kept them at bay.

Their misery was compounded midway through the second half when Frenkie de Jong bagged the red card for two bookable offences.

Koeman was also dismissed in the closing seconds for his protests during a frantic finish.

A point did at least move FC Barcelona up to seventh —- seven points behind leaders Real Madrid, who have played a game more —- while Cadiz climbed to 14th.

While Barcelona did most of the pressing in the early stages, they did not have a shot on target at the Cadiz goal until the 30th minute, a situation that further put the question on Koeman.

That was when Memphis Depay’s weak effort was comfortably saved by Jeremias Ledesma.

Marc-Andre ter Stegen pawed away Alvaro Negredo’s audacious 25-yard effort immediately after half-time, while Depay miskicked with the goal at his mercy at the other end.

Ledesma pushed away Depay’s drive from outside the penalty area, before Barca’s hopes of getting a positive result were dealt a blow in the 65th minute.

De Jong received a second yellow card for following through on Alfonso Espino after initially winning the ball.

Salvi Sanchez squandered a glorious opportunity inside the final 10 minutes, firing against Ter Stegen after being played in by Espino, with the ball bouncing behind off Ruben Sobrino.

Depay then had an even better chance to steal all three points for the visitors deep into stoppage time.