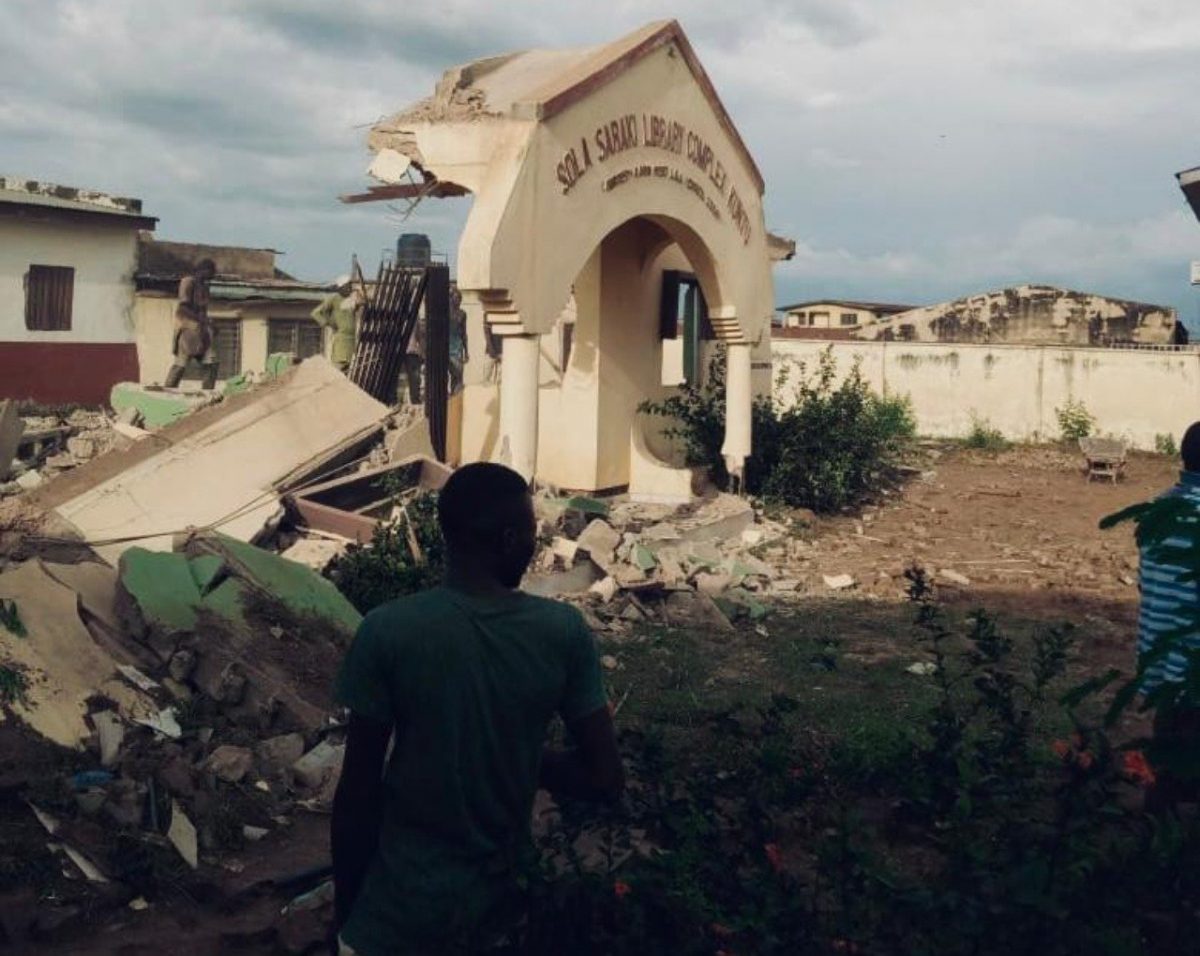 Former Senate President Bukola Saraki, and Gbemi Saraki, Minister of State for Transportation, have kicked against the demolition of a library named after their late father.

The library located along Kuntu, Agbo-Oba area in Ilorin is under the purview of Ilorin West Local Government Area.

In a telephone chat with Daily Trust, the Transition Implementation Committee Chairman (TIC) of Ilorin West, Tosho Abdulgafar, said the demolition was approved by the council.

According to him, the action was premised on the complaints of the community that the building has become a hideout for criminal elements.

“The place has been vandalised and it was the community that approached the local government ever before our assumption of office to help repair the facility not to serve as hideout for hoodlums.”

“After our discussion with the community, we agreed to turn it to an IT centre. So after the ongoing demolition, the construction will commence immediately for an IT centre to make the place useful for the residents.”

Asked if the place will still retain the name of Saraki, the TIC boss said such decision was subject to the view of the people since it belongs to the local government.

“Late Saraki is someone we have all benefited from and I don’t think it is bad to name if after him. But if the public wants another thing, it is strictly their choice”, Tosho added of the decsion to demolish the library named after Saraki.

Also the Commissioner for Local Government, Chieftaincy Affairs and Community Development, Arch Aliyu Saifudeen, whose ministry oversees the council told our correspondent that there was a lot of misinformation on the demolition.

“The property belongs to Ilorin West and it was only named after Saraki. They only want to reconstruct it. It will still be named after him,” Aliyu said.

Reacting to the incident through a tweet, the former Senate President, said “I just got the news that the major official assignment carried out by the Governor of my state, Kwara, today, is the demolition of an old public library named after my late dad, Dr. Olusola Saraki.

“May Almighty Allah continue to retain a place for Oloye in Aljannah Firdaus”.

Also, Saraki’s sibling, Gbemisola, said, “Yet again, today we find that the Governor of Kwara State’s focus is not on building up Kwara, but on demolishing buildings which were owned or named after my late father, the Waziri of Ilorin.

“No matter how many structures are demolished, Baba Saraki’s legacy can never be destroyed, because it lives in the hearts and minds of the great people of Kwara. May Allah continue to guide and protect us all”, she tweeted.

The demolition of the library is coming one year after the Ile Arugbo GRA residence of late Saraki was destroyed by the State Government.

The case is, however, still in court.

Wike, Akpabio Mock One Another Before Buhari