Rumours About Mrs Ganduje And Other APC Contradictions 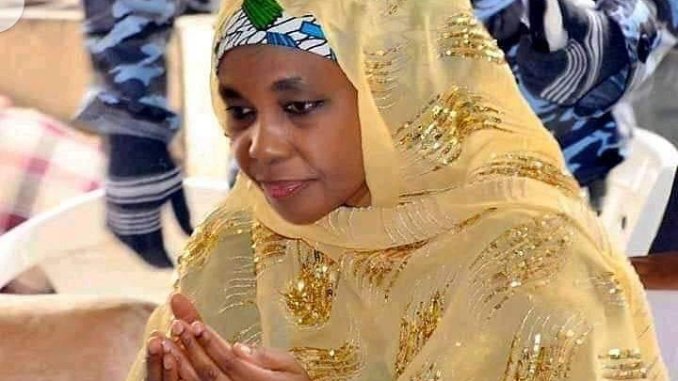 The government according to the statement ascribed the news of the arrest to rumours saying that neither the Economic and Financial Crimes Commission, EFCC nor any other security agency came out to announce the arrest.

It was also well soothing that as the news of the arrest spread around Kano and the rest of the country that a photograph of the Kano First Lady arriving Kano saw her escorted by her loyal husband. Even if solemn, the fact that her husband deplaned with her from the private aircraft that returned her to Kano, it was a matter of comfort. That is, given the background to the rumour of the arrest.

Her grave expression was reflective of the fact that no First Lady has before now been subjected to such rumours of an arrest.

No one would dispute the government’s claim that it was rumour driven by mischievous individuals. That is especially so, given that no journalist has until now gotten a reaction from the EFCC.

What is, however, bothersome is the origin of the arrest.

The rumour of the arrest flowed from a petition allegedly written by the son of the First Lady, Abdulazzez Ganduje over a land deal involving his mother.

Given that the APC wind of change with its promise to sweep away corruption has been largely ineffectual, what is, however, of interest is the extent to which the party has become a bundle of contradictions. Even in personalities.

No one expected that the contradictions within the APC would get to the extent of two members of the party, and of the same family and even worse, a son authoring a petition against his mother.

The same rumours that fired the news of the arrest of the First Lady early this week claim that the son, that is Abdulazzeez fled to Egypt after authoring the petition against his mother.

How one would describe this, if true, is really befuddling. It is even shocking that the Kano State Government has to the best of the knowledge of this correspondent not dealt with the Abdulazzez angle to the story.

Such contradictions are everywhere within the APC administration.

One would not forget the war between APC poster lady, Abike Dabiri-Erewa and the minister of communications and digital economy, Dr. Isa Pantami.

That war got to the extent of officials physically stopping officials of the Nigeria Diaspora Commission NiDCOM from the office that they had occupied.

The wars in the APC over personalities and politics are everywhere and it is remarkable that no effort is being made to resolve them.

You can as well imagine the ‘not fake news’ of the trauma Alhaji Lai Mohammed has been forced to go through in Kwara where the former chief publicist of the APC has now been practically sidelined.

In Delta State the war in the APC got to the extent that party officials throw allegations and counter allegations of undermining the party through collaboration with the dominant Peoples Democratic Party, PDP.

In the Isoko South Constituency by-election that took place last month, a tendency within the party was said to have worked against the party’s interest by sponsoring another party candidate simply because they wanted to embarrass the state chairman, Prophet Jones Erue who is from that constituency.

They so did that the result from the chairman’s polling booth gave the APC a miserly two votes!

The contradictions in the APC also go beyond personalities into state matters.

At the peak of the labour crisis in Kaduna State there were also rumours that the strike was fueled by state officials from neighbouring Kano State.

Of course the reason for such would not be farfetched. When Governor Ganduje sacked HRH, Alhaji Lamido Sanusi as emir of Kano, Governor Nasir El-Rufai went out of his way to identify with him. Within days of the exile of the former monarch to Nasarwa State, El-Rufai travelled there and removed him and honoured him with assignments in Kaduna.

Perhaps without El-Rufai’s intervention, Sanusi’s rich depository of economic thoughts would have remained locked away in the remote lands of Loko in Nasarawa State.

While there are so many examples everywhere to give of the seeming contradictions within the ruling party, there is perhaps none as the fight within a family that would lead a son to petition against his mother.

If the Kano State Government has not reacted to this and denied this, it could well be understandable. It is a shame that no one should play politics with and our prayers indeed should go to the family if it is true.

Even more, our prayers should reach out for Nigeria to heal the ruling party of such seeming contradictions that have diminished governance.

Ooni Opens Up On Private Jet ‘Gift’ From Adeleke