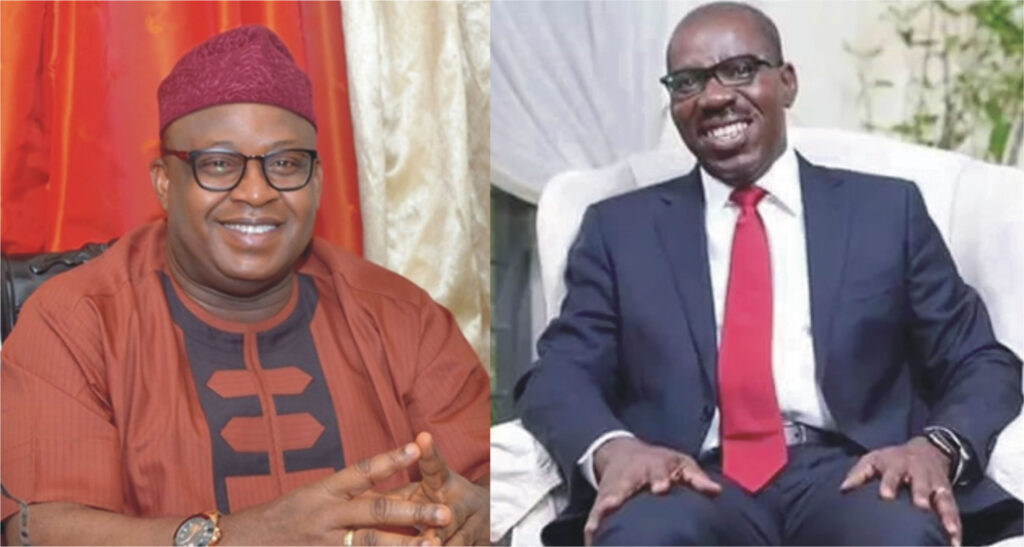 He moves with a smileless face, a brash gait that conveys the symptoms of failure. He anchored his campaign on the erroneous make- belief that godfathers were to be slaughtered.

Edo must eliminate them from its body politics. The hapless onlooker chorused “ayes”, clinching his fist to drive home the import of the new assignment; to quench the thirst of their imaginary godfathers.

Edo is on a sharp decline. The rains are washing off the roads, rain creating ponds of water that stagnates on the streets because the drains have been left without desilting. The government house now takes the shape of a limited liability company, with three piece suits, blue collar business executives coming in and out. The business they do is only known to a few people, it circulates within the concentric circles of “paddy-paddy” friends.

Protea Hotel has become home to quite a lot of these briefcase business executives. Edo must be working for the right reasons. No! Edo is on the decline. The energy that ought to be conserved to fix infrastructure, is deployed on scripting orchestrated political conspiracies in search for control. The PDP was existing before Governor Obaseki and his Deputy ran under its umbrella for cover when they were left under APC heavy downpour to teach them how not to be ungrateful to their benefactor.

PDP has been a strong party in Edo state. They won presidential election in 2015 even when Comrade Oshiomhole was Governor under the APC platform. They won four House of Representatives seats out of nine, and two senatorial seats out of three. They also won the 2019 presidential election when Comrade Oshiomhole, Governor Obaseki and his Deputy were still romanticizing under the tattered broom of the APC.

Under the Oshiomhole-led administration, the PDP played such a formidable opposition that kept the government perpetually on its feet when policy issues become instructive. Dan Orbih, leading the PDP formidable army, as State Chairman, was vitriolic in his criticisms as we muscled energy to leave legacy projects in Edo state. His criticisms were very constructive and engaging. He helped us as a government to chart a road map that responded to the inherited decay that Edo had become at that time. Dan Orbih’s mien is very ambiguous.

You may see him a very harmless party man, but his tongue is very acerbically yoked to compliment his feminine voice that easily disarms his listener when be climbs the podium to talk. As a Special Adviser on Media and Strategy and later Commissioner for Information in that government, I had an uphill task often times disabusing the minds of the public each time Dan Orbih provoked a discourse against the government of the day.

When Governor Obaseki was hawking his goods under the APC’s heavy downfall, he found shelter in PDP’s umbrella. Like a prodigal son who showed sign of penitence, he spoke in manner that roused members of PDP to draw sympathy for his narrative. Blackmail upon blackmail, the rhetoric of the godfather’s syndrome sunk in with effervescent candour.

I had openly defied the party’s directive to queue behind Governor Obaseki for the simple reason that my instincts have never misled me. Out of desperation and in order to safe his face, he was ready to kowtow to anything PDP leadership was putting on the table. Before now, the party had concluded its congresses which gave birth to its present state executives.

The party was on its way to elect her flagbearer when the national leadership pulled the rug underneath its feet. It was Governor Obaseki that was negotiated to emerge as the party’s candidate. The PDP state chapter, despite my admonition, failed to extract a commitment by way of power sharing agreement that would compensate for all the efforts that were hitherto put into sustaining the party thus far. Governor Obaseki was bland, the party was blank. It was like the case of the falcon not hearing the falconer.

I opted to support the APC candidate Pastor Osagie Ize-Iyamu. They called me names, suspended me for one month but I didn’t bulge. I had known the symptoms of their familiar disease. They cannot change suddenly. Their perennial disease is that of assuming full authority of the political scenario using one side of their mouths to shout “no to godfathers”, while the other half of their mouth is steeped in godfatherism. The Obaseki disease which he has imported into the PDP is beginning to manifest.

He has a formidable National Vice Chairman representing the South-South, Chief Dan Orbih to contend with. He has already dished the core PDP using his usual blackmail tactics to spread the gospel. He waited for a year before he came up with a half-hearted cabinet numbering 11 unwise men, who would fill the void of a government that is presently on recess. All 11 are of the APC migrant stock.

The e-registration exercise has all 18 former APC chairmen of local government council. The Chief of Staff, Secretary to Government, Special Advisers, also belong to the APC mobile flock who accompanied Governor Obaseki in his migration to the PDP. He detests the core PDP who provided him shelter when he was under the APC rain like a homeless chicken. He loves to be called the leader, but he hates the sound of a godfather’s anvil. During the day, he doesn’t like the sound of a godfather, but at night, he wears the garb with hypocritical relish.

The vibration from the inner fortress of the PDP has made my initial predictions to come full circle. Those who called me names when I opted for the APC’s candidate have since called to commend my futuristic postulations which presently define the political narrative of a party and a government that are serated by an elastic chord of dubiety.

Take your government, leave our party for us, seems to be the prevailing refrain as the Governor tries to repeat the symptoms of his familiar disease of subtle take over of political structure. They call them “technocrats in government”, but the optics of their involvement in political permutations and disposition are often confounding. They visit political vendetta on their perceived enemies and deploy state resources enabled by their trained thugs to go after those who share different opinion. An atmosphere of awry silence permeates the Edo polity, core PDP loyalists holding tenaciously to their legal position, while the APC migrants are busy enjoying the spoils of governmental positions. The one-legged State Assembly with a rubber-stamp Speaker dispatches executive request with the speed of light. Submit your commissioners name today and have it today, all cleared. No interrogation, no inquisition, no questioning. Governor Obaseki is running the state with three political parties: APC, NewPDP, OldPDP. The “newPDP” forms the nucleus of his imperial godfatherism, while the oldPDP are clutching at their party positions to remain afloat, each man asking “where did we get it wrong”?

A habit has a way of humbling the executor. Just last year, almost every PDP member believed that Governor Obaseki was wrongly treated in APC power matrix. They thought Comrade Oshiomhole was the problem. With the present happenings in Edo state PDP on the one hand and the government on the other, it is becoming crystal clear that Governor Obaseki has always been the agent provocateur. Displaying the hauteur of a smart intellectual snob, he sends his foot soldiers forward to stir the hornet’s nest to feel the reaction.

They issued a nebulous statement, purportedly suspending Dan Orbih, a man who literally sustained the PDP dirge when Obaseki and myself were on the other side, working under Governor Oshiomhole. Dan Orbih may not be your quarrelsome politician, but his focus on issues to sustain the PDP legacy, was never in doubt. Even at the 2020 gubernatorial election, he campaigned vigorously side-by-side Governor Obaseki at his own expense, to ensure that the PDP legacy gets a deeper threshold. Unknown to him that the man for whom those energy sapping campaigns were meant, does not know how to compensate hard work. They have imported their APC disease to PDP, back stabbing their benefactor, by repeatedly singing “kill-the-godfather” chorus to confuse their unsuspecting minds….