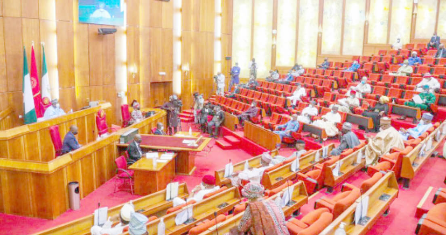 On Wednesday the Senate, passed the 2022 Appropriation Bill for second reading after over one hour of debate on its general principles.

Recall that President Muhammadu Buhari had on Thursday last week presented a N16.39 trillion budget proposal for the 2022 fiscal year.

He said out of the total expenditure of N16.39 trillion proposed for the Federal Government in 2022, N768.28 is for Statutory Transfers; N6.83 trillion is for Non-debt Recurrent Costs; and N4.11 trillion for Personnel Costs.

Others are N577.0 billion for Pensions, Gratuities and Retirees’ Benefits; N792.39 for Overheads; N5.35 trillion for Capital Expenditure, including a capital component of statutory transfers; N3.61 trillion for Debt Service; and N292.71 billion Naira for Sinking Fund to retire certain maturing bonds.

The budget has a deficit of N6.26 trillion, an amount representing 3.39 per cent of estimated GDP.

Many of the senators, who participated in the debate, expressed concerns over the increasing fiscal deficit and the government’s penchant for borrowing to fund capital projects.

While some defended the borrowings, which the executive said were to build the much-needed infrastructure, others advocated Public-Private Partnership (PPP) as an alternative to loans.

Senator Betty Apiafy (PDP, Rivers) dismissed the claims that the country was not overborrowing.

She noted that Nigeria’s debt to revenue ratio at over 70 per cent is among the highest in Africa.

“Borrowing is not bad, but we need to ensure that what we borrow is judiciously deployed,” he said.

Lawan, therefore, urged the National Assembly committees to step up their oversight of the executive to ensure that government resources were prudently used.

The bill, after scaling the second reading, was referred to the Senate Committee on Appropriations to report back in four weeks.

Meanwhile, the Senate has suspended plenary till November 9 2021 to enable its committees to work on the appropriation bill.

Lawan urged the committees to be thorough in their works.