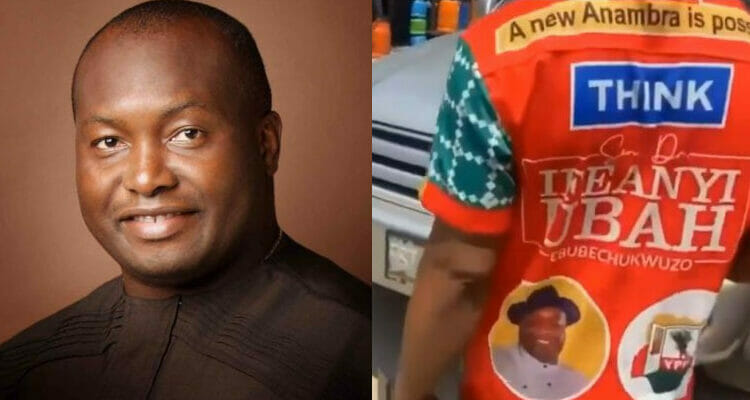 A day after reports emerged that he was chased out of the Alaba International Market in Lagos, Senator Ifeanyi Ubah has given his narration of the events saying he had a peaceful meeting with the traders. He has, however, come out forcefully to demand the immediate release of Nnamdi Kanu, the leader of the Indigenous People of Biafra, IPOB saying that the release is the only condition that will guarantee peace in the Southeast.

In a statement put out by the Senator Patrick Ifeanyi Ubah Campaign Organisation, the Anambra governorship candidate Young Progressive Party, YPP said:
“The Campaign train of the Senator Dr Patrick Ifeanyi Ubah Campaign Organisation (SDPIUCO) yesterday morning in continuation of its sensitization and engagements with Ndi Anambra in Lagos, visited Alaba international market and was welcomed by the leadership of the market led by the president. The team had robust discussions and exchange of ideas on the various issues surrounding the South East development especially with regard to the upcoming elections in Anambra State.

“The market executives who described the Distinguished Senator as one of their own thanked him for donating a brand new hilux to the market some years back and expressed their total support for his aspiration while assuring him that the dominant feeling amongst businessmen plying their trades in Lagos is that they will all relocate back to the State next month and play their roles in ensuring that the vision for a new commercial Anambra is achieved.

“In the course of the conversation, some youth leaders used the opportunity of the visit to express their sadness to the Senator over the raging issue of Mazi Nnamdi Kanu’s detention and pleaded with him to intervene on the matter .

“The Senator in his response assured them that there are ongoing efforts behind the scene at finding a political solution to the problem and also promised to relay their message to the federal government with regards to the need to treat the issue as vital especially since  some opposition party players has cashed in on that to create artificial insecurity in Anambra State and trigger voter apathy in the process as a cover for writing results illegally.

“The youths later peacefully escorted the Senator (who they kept referring to as the :king of boys”  and the “street general ” ) and his team on their way out of the market with songs of freedom for Mazi Kanu as the euphoria over their just concluded meeting and the assurances received subsists.

“It is our firm belief that this burning issue should not in any way be politicised but  rather it be given the due attention that it requires.

“Injustice to one amounts to injustice to all and as the Senator has said on several fora including a recent BBC interview  , there is need for the federal government to  address the issues surrounding the arrest of Mr Kanu especially in the face of reports that he was carrying the passport of another country at the point of arrest during his visit to another foreign country.

“The Senator at this juncture pleads that the federal government finds a political solution to this. It is our firm belief that if this is  done , the present insecurity in Anambra State will come to an abrupt end as the politically sponsored  bandits killing people under this guise will have no further excuse at their disposal. .

“The Lagos town hall meetings were rounded up last night with a dinner party hosted for the Senator by some selected stakeholders and members of the Anambra bussiness Community including some market leaders , executives of some social clubs and some members of the Anambra  progressives and development Union.”