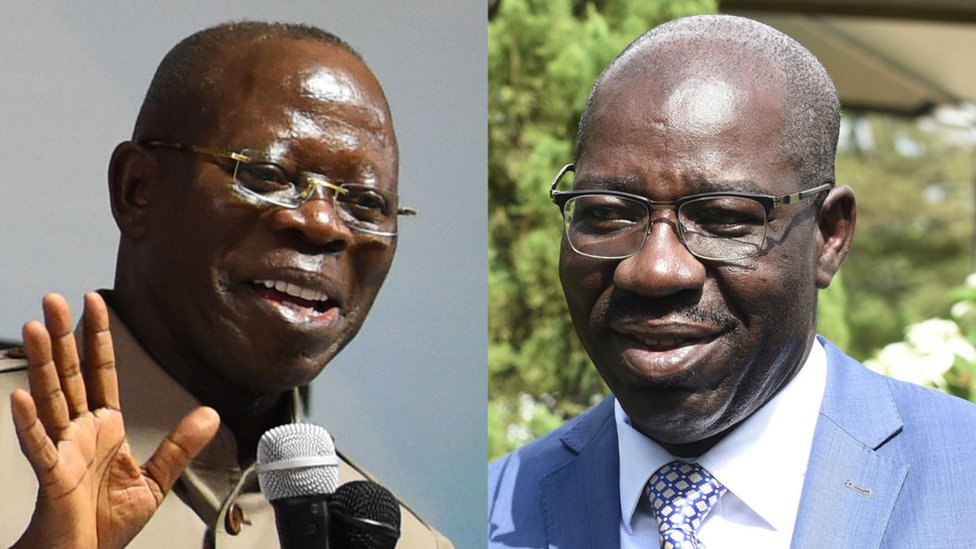 It was a shock seeing Governor Godwin Obaseki of Edo State ordering members of the Peoples Democratic Party, PDP opposed to his plans for harmonization of the executive of the party at all levels to leave the party.

He spoke at a gathering of stakeholders where the decision to suspend the national vice-chairman of the party, South-South, Chief Dan Orbih from the party was adopted.

The developments in the Edo State chapter of the PDP flowed from the defection of Obaseki to the PDP penultimate June. It came after Comrade Adams Oshiomhole used his position as national chairman of the All Progressives Congress, APC, to stop Obaseki from having the second term ticket of the APC. The Edo State governor at that time, last June, was practically reduced to a political wanderer.

It was a sight to behold that day last June at the APC national secretariat as Governor Obaseki, clutched his credentials as he appeared before a committee constituted by Oshiomhole to defend allegations of certificate forgery.

For one reason or the other, the Oshiomhole panel eventually disqualified the same man that four years ago, Oshiomhole had stumped through Edo State to enthrone governor.

After Obaseki was forced out from the APC, and following flying visits across the country – Uyo- Port-Harcourt-Asaba- he landed in Benin where the PDP grudgingly accepted him.

Two men who were crucial to the final acceptance of Obaseki into the party were Ogbeide Ihama, the member representing Oredo Federal Constituency in the House of Representatives and Dan Orbih, the man who had built and held the party in the days of the wilderness when Oshiomhole was in power.

At the time Obaseki came in, Ogbeide-Ihama was in pole position to emerge as the PDP candidate for the 2020 governorship election, having built synergy with the party structure across the state that was effectively in the control of Orbih.

For a man that had set his sight to be governor in 2020, it was unarguably a bitter pill being asked by party grandees in Abuja to step aside for the governor to take the ticket.

Especially given the tardiness that characterized the process at that time, Ogbiede Ihama had the opportunity to scupper the emergence of Obaseki as the party’s candidate by insisting that the timeline for the process had been breached. He could have affirmed that the bus had left the station by the time Obaseki entered.

He was, however, made to withdraw alongside other leading contenders.

At that time too, Orbih had relinquished his position as party chairman in favour of Dr. Tony Aziegbemi, the former member of the House of Representatives. However, as everyone in Edo knows, the Edo PDP had over the years been infused with the fighting spirit that Orbih brought to bear.

With Orbih as party chairman, the PDP had put the Oshiomhole led APC to task in elections winning the majority of National Assembly seats and numbers in presidential counts in 2011, 2105 and 2019.

However, Orbih like Ogbeide-Ihama also kowtowed to the party grandees plea and became Obaseki’s campaign manager in 2020. The sight of Orbih on the rostrum campaigning for Obaseki did not foretell the kind of development now ensuing in Edo.

The suspension of Orbih and Ogbeide-Ihama, the two critical factors in Obaseki’s emergence as governor must have befuddled many. Especially given that it was under the watch of the governor.

Obaseki’s allies allege that the two men were frustrating the governor’s move to harmonise the PDP structure. For them it is especially painful that ahead of the PDP National Convention this October that the governor would not be in a position to have a say in the Edo delegate list which they claim is being dictated by Orbih.

The development has led to the new phrase in Benin that “Obaseki should take his government and leave our party for us.”

The division has been hampered by the seeming lack of communication on the part of the governor. The nomination of 11 new commissioners all from the former APC helped to worsen perceptions about a governor regarded everywhere as a fighter.

“How can you bring all 11 commissioners from your side after taking deputy governor and SSG,” many in the Old PDP have been asking.

Sources say that the governor has promised another 10 commissioners for the Old PDP but after harmonization.

However, what Obaseki and perhaps the Old PDP are not seeing is the role of fifth columnists in the whole matter. That is the role of PDP chieftains who lost out during the congresses in 2020, chieftains with national reputation but bereft of local support. A number of these chieftains have been egging Obaseki on in his new fight with the intention that what they lost during the congresses of 2020 that they would get through harmonization.

In his first fight with Oshiomhole, the Obaseki crowd was able to get the executive in Oshiomhole’s ward to suspend him. In Orbih’s case, that has been unsuccessful putting the whole suspension drama into a constitutional nullity.

Social media is now suffixed with Obaseki as a fighter and a man of ingratitude. It doesn’t do him good, especially given his sight towards a legacy. One can only imagine the imagination of Comrade Oshiomhole at this time. After repeated disappointments, Oshiomhole may now laugh as Obaseki who seemingly betrayed him, and Orbih who tormented him government fight one another.

APC State Congress In Taraba Postponed Due To Insecurity

War In Southwest PDP As Chiefs Fight For Top Posts