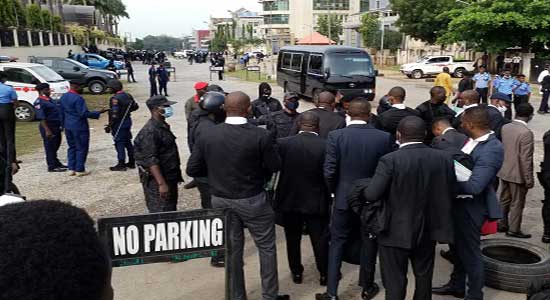 Anxiety has continued at the Federal High Court in Abuja as over 100 lawyers and some supporters of the leader of Indigenous People of Biafra, Nnamdi Kanu, protested against the closure of the court by security operatives.

The conflict heightened as lawyers got information that no other Court would sit because of the planned arraignment of the leader of Indigenous People of Biafra, Mazi Nnamdi Kanu.

Another bone of contention was the directive that not more than five legal representations would be allowed from both plaintiff and defendant.

Also, security operatives have barred activist, Omoyele Sowore from accessing the courtroom to witness the trial of Nnamdi Kanu.

Omoyele Sowore who was dressed in a traditional isi-agu was told to go back by operatives of the Department of State services and the Nigerian Police Force.

Sowore who spoke to journalists said he was at the court for a number of reasons.

He said, “I am here to check the registry because for a while I have not been charged to court, I need to know about my treason case.

“Also I am here to witness the trial of my friend, Nnamdi Kanu, the court is a public space and the public should not be barred from accessing the courtroom.

“People have the Right to self-determination, Nigeria has not worked and will never work. So Nnamdi Kanu is Not wrong and his trial should not be in secret.

“Security operatives have consistently failed to do their jobs and now you see them harassing journalists and lawyers.”