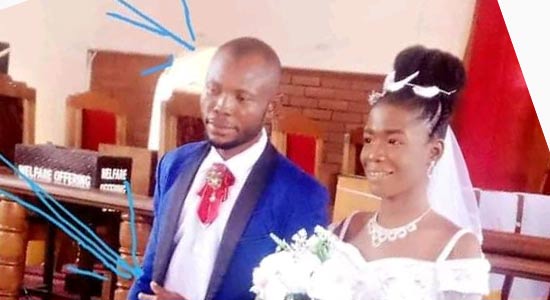 Disaster struck in Nnewi, Anambra State when a 32-year old woman, identified as Chibuzor Nwokolo, was allegedly strangled to death by her husband.

GWG gathered that it was barely one-month late Chibuzor Nwokolo got married to her estranged husband, Chimaraoke Ogueri (formerly known as Promise and Best).

Nwokolo got wedded to Chimaraoke Ogueri on the 18th September, 2021.

According to the report gathered, the ugly and unfortunate news came to the deceased family as a rude shock when the estranged husband called the father to come evacuate the corpse before it decomposes.

The deceased’s sister, Uche Nwokolo who informed her Cousin lawyer of the incident, said “On 12th October, Chimaraoke Ogueri strangled Chibuzor, after which he put a call across to our father, Mr. Pius Nwokolo informing him that he had killed his daughter and that he had better come quickly to pick up the corpse before it decomposes.

In shock, Chibuzor’s father shouted and quickly informed the larger family. Some family members were immediately sent to Nnewi to verify the incidence.

In an Audio Conversation between the deceased sister Uche Nwokolo, and Chimaraoke, obtained by newsmen, he confirmed that he has successfully carried out his plan, therefore, Chibuzor’s family should come and carry away her corpse.

The matter was reported at the Central Police Station in Nnewi and the corpse was retrieved after breaking the door open.

The IPO, Inspector Uche , was contacted but he declined to speak on the matter, stating that the investigation is still ongoing.

However, brother to the Suspect Alex Ogueri has placed a bounty for information that will lead to the arrest of Chimaraoke Ogueri.

In viral audio, Alex Ogueri said in Igbo language “We accompanied him on the 18th September, for the marriage ceremony of this lady at Ufuma, Orumba. Today 18th October, made it exactly one month they got married. It is not as if he killed the lady by accident, but he did it intentionally and still went ahead to call the lady’s family to come and take her remains. We have not seen such kind of temptation before, it is only in movies that we watch it. As I am making this voice note, we are confused and don’t know what to do. The lady’s family has also come here with the Police. How long are we going to continue running for an offence we knew nothing about? Please if anyone sees or knows his whereabouts, he or she should contact us or report to any nearest Police Station. He has to face his punishment for killing a person. There is a price for any one with useful information.”