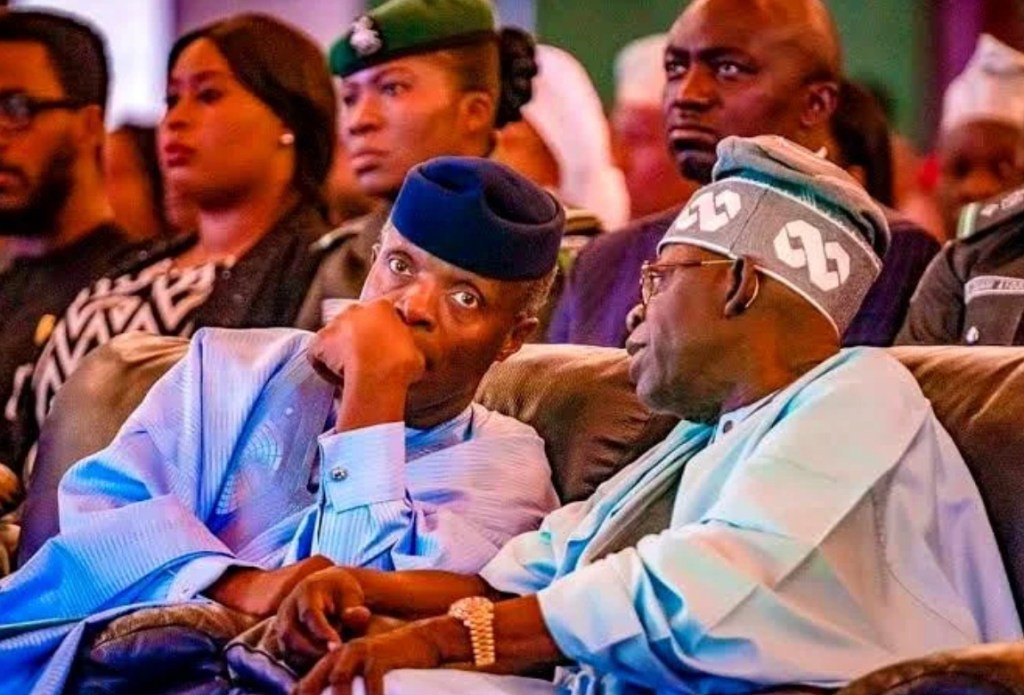 The battle of wits between supporters of Asiwaju Bola Tinubu and Vice President Yemi Osinbajo has moved on to a quarrel over the recognition given to the pro-Osinbajo Progressive Consolidation Group, PCG by the national leadership of the All Progressives Congress, APC.

GreenWhiteGreen GWG reports that the PCG was and remains the only solidarity group in the APC to receive such a recognition despite the more vocal and visible engagements of the pro-Tinubu South-West Agenda for Asiwaju 2023 (SWAGA ’23).

The pro-Tinubu SWAGA in kicking against the recognition of PCG has said it is not the duty of the National Caretaker Extraordinary Convention Planning Committee of the (APC) to issue endorsement letters to support groups ahead of the 2023 presidential election, Daily Independent reported on Tuesday.

In a letter dated October 4 and sighted by Daily Independent, Abubakar Suileman, APC Director (Administration), said Mai Mala Buni, Chairman of the caretaker committee, recognised the PCG as a “support group” of the party.

“We write to inform you that the national chairman, His Excellency, Hon. Mai Mala Buni has approved for your recognition as a support group of the party,” the letter read.

However speaking with Daily Independent when asked why the national leadership has not recognised his group, Hon. Bosun Oladele, a former member of the House of Representatives who is the Secretary of SWAGA said it was not the duty of the party leadership to endorse groups as doing so might open gaps in the party and cause rancour.

He said, “Let me start by saying that though it was reported, I can’t verify the authenticity of the report”.

“However, assuming the report was true, the purported letter of recognition was signed by an administrative officer at the headquarters of APC and not the Chairman himself. That alone speaks to the weight to be attached to such things”.

“Furthermore, it is not part of the duties of the National leadership of our great party to issue recognition or endorsement letters to any group as that might open up gaps within the rank and files of the party from the top to the polling units level”.

“This must be viewed from the logic that no matter the number of pressure groups within the party, each of them belong to the National leadership”.

“The Progressive Consolidation Group is not the only group with a vested interest in the party, I make bold to say,” the Pro-Tinubu SWAGA official said in dismissing the recognition of the pro-Osinbajo PCG.

“Every card-carrying member of APC is statutorily recognized by the party and I think that suffices for the purposes of pursuing one’s right and aspirations within the party and don’t forget such recognition is not done clandestinely or for any ulterior motives”.

“Although I am not the spokesman for Governor Buni and his team, I can hazard a guess that such thing is not so important to warrant any denial or confirmation”.

“As for SWAGA’23’s position, we have been abiding strictly with our set goals and objectives and you can see clearly that we have the preponderance of opinion, goodwill, personalities, genuine display of commitment and love in support of our brand and the subject of our advocacy that is Asiwaju Bola Ahmed Tinubu wherever we have been. That’s the most important recognition needed now, you’ll agree with me”.

I have No Personal Issues With Peter Obi – Metuh