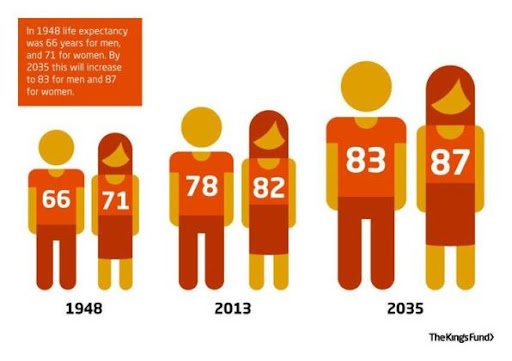 Women according to research live longer than men for a number of reasons bordering on lifestyle, emotional factors and perception of issues among other reasons.

Women according to findings are biologically and sociologically at an advantage when compared to men who are weaker. Researchers also point to the fact that most female children tend to have stronger immune system than their male counterparts and are less likely to die as infants compared to male children.

Women are less likely to engage in risky jobs

Unintentional injuries are the third leading cause of death in men, according to the Centre for Disease Control and Prevention. Again, you can blame it on biology: the frontal lobes of the brain—which deal with responsibility and risk calculation—develop much more slowly in males than females, experts say.

Men are known to deny illness and minimize symptoms because they don’t want to go to a doctor and find out something is wrong.

Most men usually bottle up their emotions, but women tend to reach out and talk to others. Because of the strong social connections women have they experience a 50% lower chance of dying than men who keep few social ties.


According to a health publication, heart disease is the leading killer of both men and women, but men are more likely to develop it and die from it as early as their 30s and 40s.  However, women typically develop heart disease 10 years later than men. They’re protected from it until menopause, since their bodies churn out estrogen, which helps keep arteries strong and flexible.

Moreover, some researchers from Imperial College School of Medicine in London, found that women live longer than men because they have stronger immune system, which helps them to guard against certain ailments even when they are old.

Chemical In Body Odour Can Trigger Aggression In Women – Study