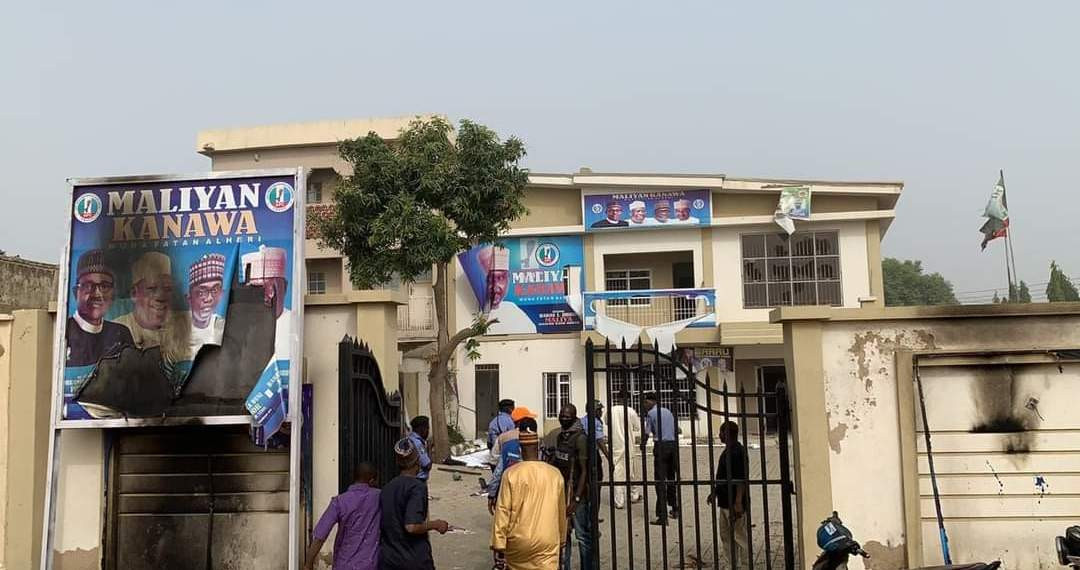 The headquarters of a faction of the All Progressives Congress (APC) in Kano state used by the Senator Ibrahim Shekarau faction of the party was on Thursday set on fire. The building was until recently being used by a member of the rival faction and APC 2023 governorship hopeful, Senator Barau Jibrin as his campaign base.

The secretariat is located along Maiduguri road in Kano metropolis, and less than three kilometres from a mobile police barrack at Hotoro area in Tarauni Local Government Area.

The building which housed the secretariat of the factional group of the APC led by former Kano governor, Ibrahim Shekarau was set ablaze after being vandalised. The faction is opposed by the faction loyal to the incumbent governor, Abdullahi Ganduje.

The incident occurred after a Federal High Court in Abuja on Tuesday, November 30, upheld the congresses conducted by the Shekarau faction, and nullified congresses at the ward, local government and state levels conducted by the rival faction and also issued an order restraining the Ganduje faction from appointing a new executive.

However, shortly after the building was set ablaze by protesters on Thursday, December 2, residents of the area intervened to quickly put out the fire and confronted the arsonists. Police later arrived at the scene to maintain law and order.

Before the fire incident on Thursday, GreenWhiteGreen GWG had reported how the Kano-based lawyer who represented the Sehkarau faction of the APC was served a ground rent of N3 billion hours after the judgment was delivered.