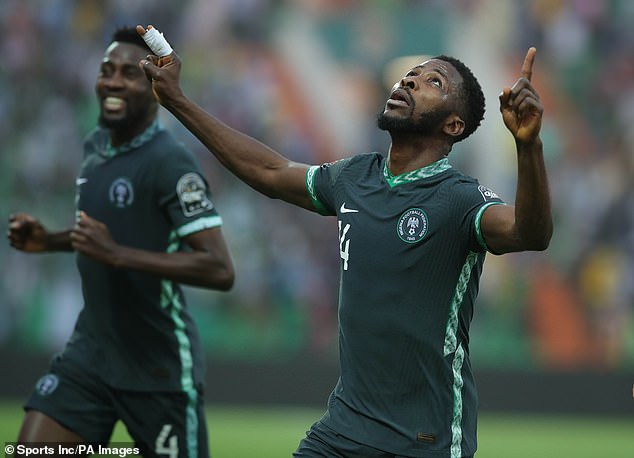 The Nigeria national team, the Super Eagles soared high against Egypt as they secured a 1-0 win in the first game of Group D. The game was predicted to be a frantic encounter, with both teams lining up strongly and hoping to start on the front foot. It was one to look out for as two of the continent’s finest went head to head.

Nigeria began the game the better, as they dominated in all areas, and created more attacking threat. That goalscoring desire paid off for the Super Eagles as Kelechi Iheanacho pounced on a good chance with a half volley after receiving the ball from fellow midfielder Joseph Aribo. It was a stunning strike which is an early contender for goal of the tournament.

The second half which was more like the first, saw Nigeria prove to be the stronger outfit as they constantly kept Egypt from reaching target man Mo Salah with a resilient all-round performance in defence and in the attack. This brilliant performance saw Nigeria win Egypt and sit at the top of Group D.

Here are five takeaways from Nigeria’s victory over Egypt.

Nigeria displayed a terrific defensive performance, keeping out one of Europe’s finest goal scorers and Egypt’s target man, Mo Salah. This fantastic job at the back was anchored exceptionally by William Troost Ekong, who led the defence line with maturity and coordination.

Also adding experience to that back line was Kenneth Omeruo who was strong and effective in stopping Egypt’s attack. The Super Eagles could go all the way if they keep up this resilience in defence.

The Nigerians were effective in all areas of the pitch as they consistently worked hand in hand and helped each other throughout the game. The wingers were always seen tracking back to help out the defence line, and there was constant pressing from striker, Taiwo Awoniyi who led from the front. The togetherness of the squad’s performance on tuessay was vital in the victory and should they continue they would stand a great chance of conquering Africa.

The whole nation of Africa and fans worldwide of the sport who watched would applaud Moses Simon. The Nantes man was terrific on the flank as he constantly worried Egypt’s defence. His blistering pace, quick feet and exquisite crossing abilities which created the opener seemed to be Nigeria’s weapon going forward. Kelechi Iheanacho was also looking sharp as ever in his rich vein of fine goalscoring form.

Taiwo Awoniyi also showed what he can bring into the team as he struck the Egyptian crossbar with a header from close range. Nigeria look the team to beat as they look to go on and win Africa’s biggest prize.

Ever reliant in the middle of the pack, Wilfred Ndidi’s fine display was a major help in Nigeria’s victory as he stamped his authority on the game with his commanding presence in midfield, intercepting passes and breaking the play of the Egyptians.

Having that reliability and assurance beside him, Joseph Aribo had the freedom to be mobile and show his attacking instincts as he created the opportunity for the game winner.

With Nigeria lining up strongly  in their win over Egypt, Austin Eguavoen still had a strong bench to pick from as players with quality and talent were stacked on the substitute list. Kelechi Nwakali, Umar Sadiq and Alex Iwobi came on in the second half and managed the game well until the final whistle as they delivered the needful. The injury to Kenneth Omeruo also saw Semi Ajayi brought on to the field of play. He was no less brilliant in the minutes he played.

AFCON: Why We Lost To Nigeria – Egypt Coach

‘It’s In Their Hands’, Salah Speaks On Liverpool Contract Renewal