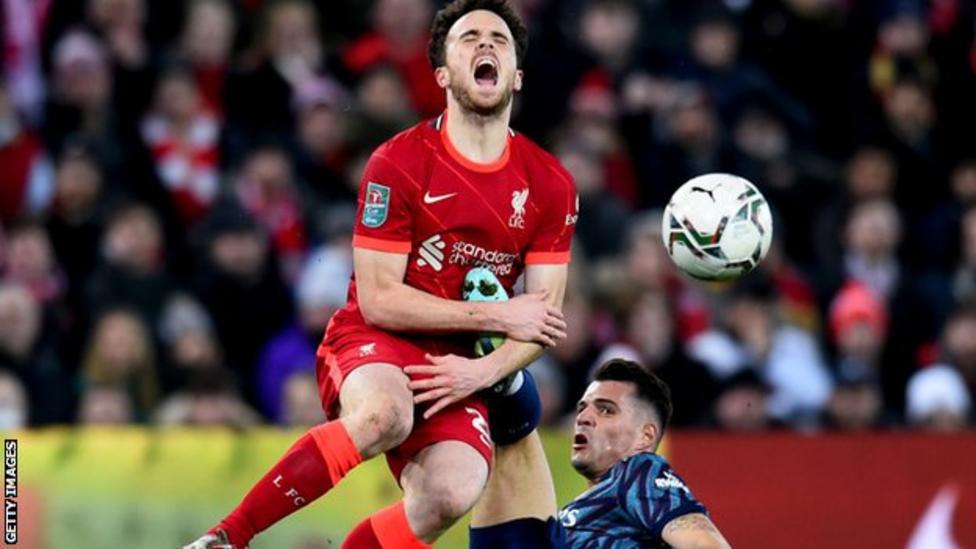 Liverpool were left frustrated by 10-man Arsenal in the first leg of their Carabao Cup semi-final at Anfield being unable to take a direct shot at goal despite dominating possession.

Granit Xhaka was dismissed after 24 minutes for denying a goalscoring opportunity – the Swiss midfielder catching Diogo Jota with a high challenge on the edge of his penalty area as he attempted to cut out Andrew Robertson’s pass.

It was the fifth red card that the Arsenal defender has gotten since 2016 giving him the dubious honour of being the player with the highest number of red cards in all competitions.

Trent Alexander-Arnold could not punish Arsenal further from the resulting free-kick, however, and the visitors produced a resolute defensive display to leave on level terms.

Despite coming under intense pressure it was Arsenal who registered the first shot on target 71 minutes into the contest, but a poor first touch by Bukayo Saka allowed Alisson to smother the England international’s shot at close range.

Takumi Minamino blazed over the crossbar when faced with an open goal with Liverpool’s best chance of the match in the closing stages.

Arsenal and Liverpool play the second leg of the Carbao Cup Semi-final at Emirates Stadium next Thursday at 19:45 GMT.

The winner will face Chelsea in the final at Wembley at the end of February, after Thomas Tuchel’s side completed a 3-0 aggregate victory over Tottenham on Wednesday.

With additional reports from BBC

It Took Longer To Recover From COVID-19 Than Expected – Messi