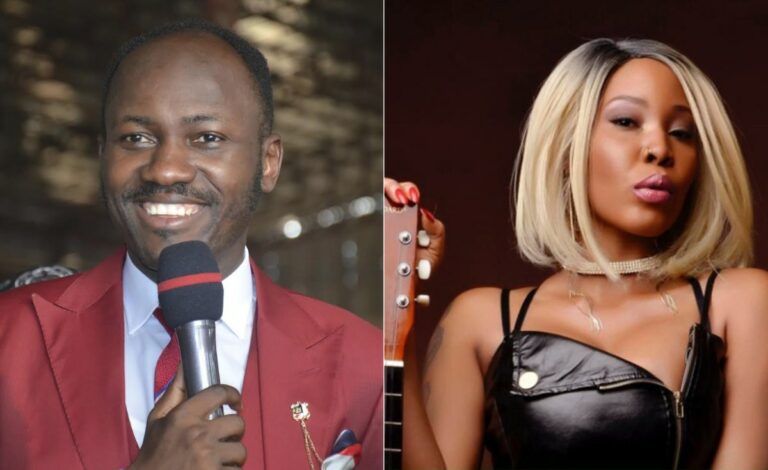 The General Overseer of Omega Fire Ministries International, Apostle Johnson Suleman who was accused of being in a sexual relationship with Stephanie Otobo has finally reacted to the allegations against him.

Recall that Apostle Suleman has been trending hot on social media after a Canadian-based singer, Stephanie Otobo released some nude photos on Twitter, which she claimed were captured during her alleged intimacy with Suleman.

Some years back, Otobo had accused Suleman of having sexual intercourse with her but later appeared in Suleman’s church to confess that the Apostle never had any relationship with her and that it was a set up.

The latest development on Twitter has reignited old battle as she claimed that Suleman actually had relationship with her.

She wrote: “This man has done everything to end my life but God is not dead, this video is the complete story of how everything happened and how it’s going lately. I’ll release a comprehensive video of everything that happened and the answers to questions.

“That it was other pastors and politicians that wanted to bring him down. How come no name was mentioned.? I only did that cos the pressure was too much and everyone had left me to suffer alone. No support. I had to give up at that moment to have the opportunity for reinforcement,”

However, Apostle Suleman reacting to the allegations by Stephanie revealed that her was been set up.

Although he did not reveal those behind the scandal, Suleman advised his antagonist to stop using the same strategy against him all the time.

Suleman said that he tweeted about ‘End ASUU strike’ on Sunday and that on Monday, he was trending.

He wrote: “I tweeted ‘End ASUU strike’ yesterday Sunday and today Monday I am trending on twitter.. una well done!

“Same strategy all the time. You guys should had done this at least a week later to avoid traces. END ASUU STRIKE!”

I tweeted ‘End ASUU strike’ yesterday Sunday and today Monday I am trending on twitter.. una well done!
Same strategy all the time..

You guys should had done this at least a week later to avoid traces..