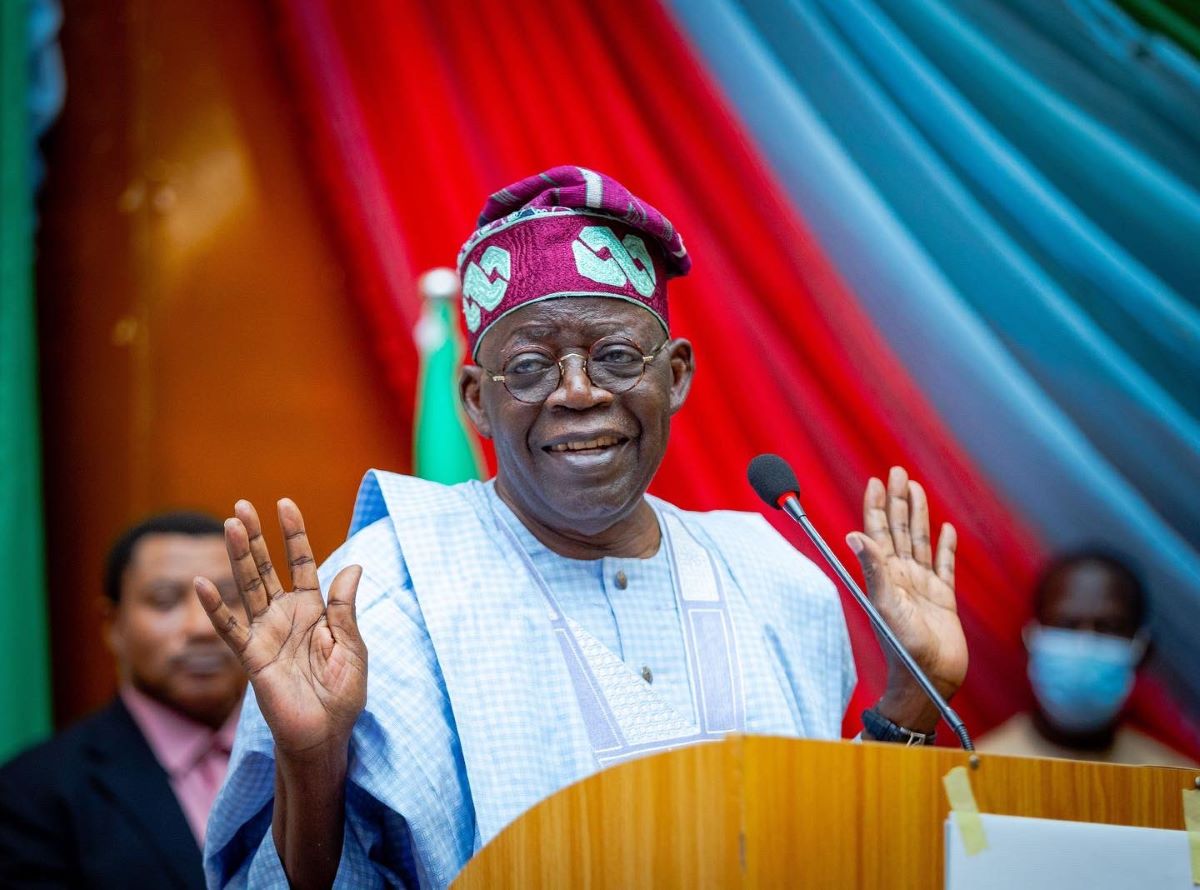 “Oro Ahmed yi nikan na ni o un ba mi leru” (It is only the issue of Ahmed that is giving me worries).  That was the fear expressed by the late, Alhaji Lam Adesina, a former Governor of Oyo State on the chances of the then Governor of Lagos State, Asiwaju Bola Ahmed Tinubu, winning  the gubernatorial election in 2003.

Out of genuine concern, Alhaji  Adesina, a great lover of Tinubu was bothered that  the Lagos Governor might not get a second term because of his repugnance to Obasanjo’s  overtures and frolics .

That was at a time when all the other governors in the South West: Chief Bisi Akande of Osun, Chief Adebayo Adefarati of Ondo , Otunba Niyi Adebayo of Ekiti, Akinrogun Segun Osoba of Ogun  and Alhaji Lam Adesina himself  were obeying the dictates and  dancing to the falsehearted music of the then President, Chief Olusegun Obasanjo.  The governors were not alone in the travesty; they were goaded by the Pan Yoruba group, Afenifere under the leadership of Late Pa Abraham Adesanya.

Obasanjo had in the most deceitful manner, cajoled the governors and the Pan Yoruba group, Afenifere in believing that he (Obasanjo) would be “soft” on them and make their victories easy insofar as they supported his election for a second term in office. The five governors fell for Obasanjo’s antics and openly worked for his second term in office. In fact, the promotion of Obasanjo’s second term bid took precedence far above campaigns for our governorship and national assembly candidates in the build up to the general elections of 2003.

Despite the fact that we were in the Alliance for Democracy (AD), the opposition party, we campaigned vigorously for the second term of Olusegun Obasanjo and indirectly his Peoples Democratic Party’s candidates who eventually defeated us. I was a victim as the AD candidate for House of Representatives, Oluyole Federal Constituency.

With heavy music and beautiful lyrics we introduced a new dimension, new lexicon to our politics: we birthed splitting of votes; Aremu Oke and Aremu Isale. Vote one for Aremu at the top (Obasanjo for President) and one for Aremu at the bottom, state (Alhaji Lam Adesina). But at the end of the day, General Obasanjo trounced us, with the deployment of all the tricks and antics you can think of.

But, in Lagos, Tinubu in his wisdom refused to follow either his fellow governors or Afenifere in supporting Obasanjo, and instead answered his father’s name. He campaigned only for his party, the Alliance for Democracy. He asked voters to concentrate all their votes at the top, the space for AD on the ballot papers in all the elections.

As we were rollicking to the lovely melody of Aremu Oke and Aremu Isale in the South West, from Ibadan to Saki, Ogbomosho, Tede, Idere and so on, particularly in Oyo State, the people of Lagos State were ‘eating to the top’ (won un Jeun Soke).  And in the real sense of it they actually ate well and this is evident, till today, in the yarning gap in riches and wealth between the people of Lagos and those in other parts of Yoruba Land.

Tinubu, using all in him: wisdom, knowledge, smartness, boldness, exposure, contacts etcetera turned Lagos around within eight years. Bola Tinubu grew the economy, politics and sociology of Lagos and the stability being enjoyed in Lagos today is as a result of his right leadership.  Lagos has become the model for virtually all developmental projects and ideas in Nigeria today.

From Fashola to Ambode to the incumbent Sanw-Olu, Lagos has continued to progress steadily while sadly, other states in the West are grappling to survive. Tinubu has established himself as the best and most dynamic leader and politician of this generation.

With the enormous powers of the Presidency, particularly under the leadership of Olusegun Obasanjo who was touted to have possessed and exercised more powers than the American President at his time, Asiwaju Bola Ahmed Tinubu crushed Obasanjo in all aspects of governance.  He challenged Obasanjo on legislative matters and he won; he contested against Obasanjo’s position on judiciary and made mincemeat of him; and in Obasanjo’s desperate bid to conquer Lagos State along with other Yoruba state, Tinubu triumphed over Obasanjo and still beating him till today.

For decades now, Nigeria’s major problem has been poor leadership. After the departure of the Balewas, Azikwes and Awolowos of this world, Nigeria has been largely unlucky with the sets of people that have been ruling us. All these past leaders that we are still praising till date did well because they were well equipped for the positions they occupied and while serving they got the best persons for all the assignments.

Tinubu, in his time as governor of Lagos State gathered the best brains in Lagos to improve the lots of Lagos socially, economically and politically. Tinubu, with his team of financial wizards raised the internally generated revenue of Lagos from about a billion Naira to over 20b when leaving office in 2007. In the socio-political scene, Tinubu took Lagos far ahead of other states in Nigeria, particularly in the South West when it became the centre of attraction virtually in all spheres. Ibadan that was the cynosure of political activities in the West was taken over by Lagos as major actors and leaders of Oyo State started running to Lagos for political directions and handouts.

I know that the children born during  and after the governorship of  Tinubu , Lam and co that are now of age to vote would not believe it that before the 1999 elections Ibadan was of greater or  of the same  socio-political standing with Lagos. That Tinubu used to come to Ibadan for political advice and directions would appear to them as tales by moonlight. But that is the truth. The story of Bola Ahmed Tinubu: The narrative of somebody who is naturally endowed to lead and ceaselessly improving himself and making people that would make leading and leadership  functional, with profound results.

That the former Governor of Lagos State was able to accomplish all these including standing boldly with the Lagos people on the creation of local councils was as a result of the ability of Governor Tinubu to identify and engage the right people for the jobs. Without knowing the incumbent Vice President, Professor Yemi Osinbajo, Tinubu head hunted him and made the Ogun State born Osinbajo, the Attorney General of Lagos State. Appointing with precision, Tinubu led Osinbajo to win the legal battle against the all conquering Olusegun Obasanjo sitting as the President of Nigeria.

It is an open secret that the major problems of the country today bother on lack of adequate knowledge, right policies and directions. Thus, to solve the problems, Nigeria needs the person with adequate knowledge about Nigeria, her challenges and prospects. The country needs that person that knows Nigeria inside out and without any pretence or any primordial baggage.

Secondly, Nigeria needs the leader that is educated and versed in all aspects of life to formulate the right policies from economy, education, health, employment to security. The person that can get the best amongst us to engender insightful policies and programs that would generate wealth and reasonable employments for our teeming youth. And thirdly, the person that is bold enough to look IMF and the likes in the face and declare that this is the best for my country and it is what I will do.

Certainly, Tinubu, more than any other Nigerian, is the most suitable for the job. It is not about, I can do it. What Nigeria deserves now is I have done it before and I am ready, more mature, more experienced and obviously more prepared to do it again. It is not about I worked or learnt under Tinubu as it is a well known fact  that no one can do it as the original person especially , If the teacher is still alive, strong and willing.  You can’t beat experience.

As I wish Asiwaju Bola Ahmed Tinubu, the Jagaban of Borgu a happy 70th birthday, it is almost certain that he will celebrate his 71st birthday as the President elect of the Federal Republic of Nigeria. He possesses a rare, uncanny ability to win against all odds as he did contrary to the fears, lovingly expressed by the Late Alhaji Lam Adesina on his chances of returning to Lagos Governor’s Office for a second term in 2003.