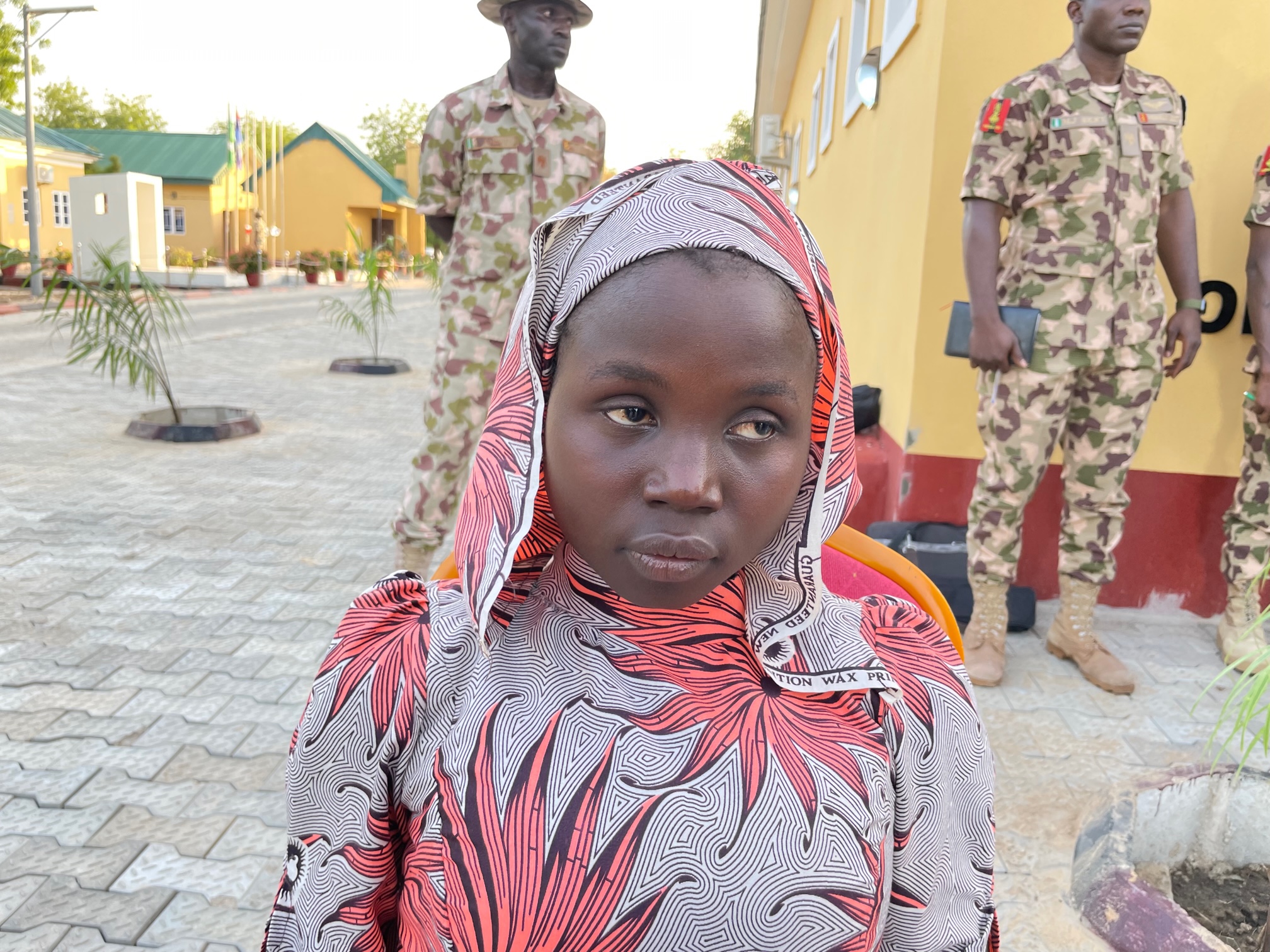 Mary Dauda and Hauwa Joseph, two of the abducted Chibok school girls from the GGSS Chibok in Borno in 2014, have told their tortuous stories of escape revealing that more than 20 missing others are still in Gazuwa camp in Sambisa Forest, eight years after being kidnapped by Boko Haram insurgents.

They disclosed this while interacting with newsmen on Tuesday in Maiduguri,  at a news conference at the Command and Control Centre Maimalari Cantonment.

Marry Dauda, who recounted her experience in the hands of the insurgents, said she could still vividly recall her compulsory marriage eight years ago after she was abducted at the age of 18 years.

Dauda said that she walked through the deadly forest for many days before she found help.

Like the others conscripted by the militants, she had been told that she would be hunted down and killed if she deserted.

She said “I took excuse from Malam Ahmed, that I will be visiting my relative from Chibok in the town of Ngoshe and he gave me one week. That is when I began my journey for freedom.

“I left Sabil Huda, popularly known as the camp of Abubakar Shekau and proceeded towards Njimiya and Parisu, where I met some of the Mujahedeens. They asked where I was going to and I told them I was given permission to visit my sister in Ngoshe.

“I finally arrived Gava village in Gwoza, after walking for many hours through the deadly forest under hardship condition. I asked some people to direct me to the home of daughter of Chibok.

“After meeting her, I told her of my plans to return home, she told me she had wanted to come with me but her husband has placed her on strict surveillance for attempting to run. I then left her and proceeded toward Ngoshe town.

“On my way, I met an old man who promised to help me to escape. But he told me that it won’t be possible in the afternoon untill the sun had set. At about 8 p.m., he took me to Ngoshe town and told me to pass the night in the outskirt of the town and proceed the next morning.

“When the day broke, I took myself to some soldiers where I was rescued with my baby,” she said.

On her part, Hauwa Joseph said she was forcefully married to Amir Abbah, Commander of Boko Haram (Munzul), at Gazuwa camp who was later killed during an encounter with the troops of the Nigerian Army.

She said that she voluntarily escaped from the camp of the terrorists during massive incursion of the troops of the Nigerian army into their camp in Gazuwa on June 12.

Joseph said as people were running the same direction where the sect members are hiding women and Children, she took a seperate route to escape from the terrorists camp.

She said on her way, she met with some of the insurgents who asked her where she was going, but she tricked them and told them that she was following some women to hide in the nearby forest.

“I slept under the tree with my child, then proceeded the next day untill I arrived the road where I approached a military check point. Initially, they thought I was a suicide bomber, but when I explained my self, they took me along with them.

She thanked the military for rescuing her, saying that she hoped other Chibok school girls still in the camps of the terrorists would be rescued or escape from Sambisa Forest

Musa said that the girls were rescued due to a massive military operation in Sambisa Forest, Mandara Mountain, and the Lake Chad area.

“We are putting more efforts to ensure that the rest of the girls are rescued through the ongiong Operation Lake and Desert Sanity,” he said.

Also, Major General Waidi Shuaibu, The General Officer Commanding (GOC) 7 Division of the Army, said the girls were rescued between June 12 and 14, around Bama and Gwoza general area.

Shuaibu said the girls had received necessary medical attention and would be handed over to the appropriate authorities shortly.

Boko Haram kidnapped 276 female students, aged between 16 and 18 from the Government Girls Secondary School in Chibok, Borno State in April 2014.

Over 100 of the girls were still missing as at April 14, 2021, seven years after the initial kidnapping.(NAN)