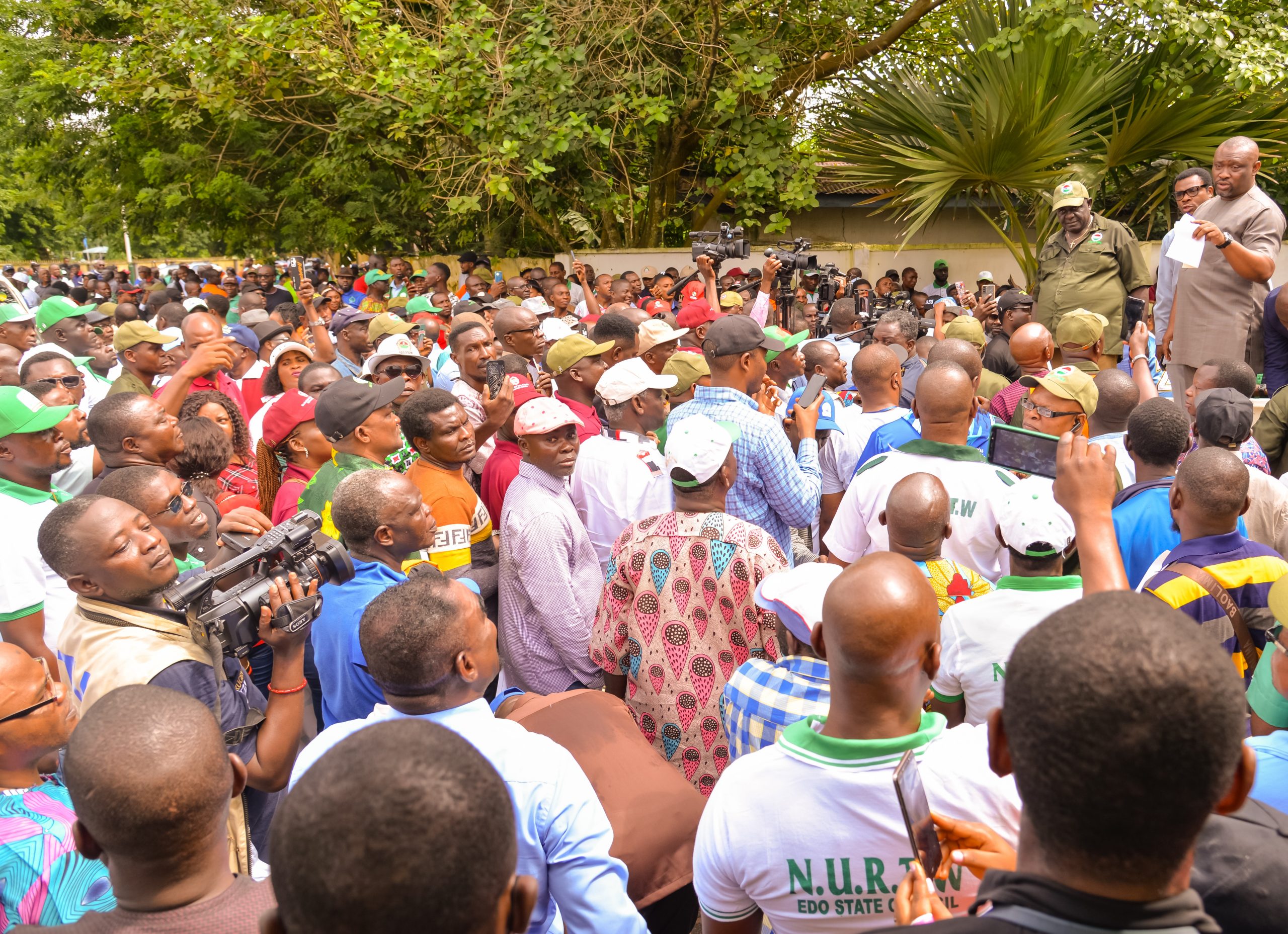 The Nigeria Labour Congress (NLC) Tuesday embarked on a nationwide solidarity protest to show solidarity with the Academic Staff Union of Universities (ASUU) who have been on strike since February 14.

In Edo State, the protesting workers who marched to Government House, Benin were commended by Governor Godwin Obaseki who described the lingering strike as a shame and called on the Federal Government to bring the strike to an end.

Obaseki, who was represented by his Chief of Staff, Hon. Osaigbovo Iyoha, said the five-month deadlock portends danger for the future of students and the university education system in the country.

The governor said, “Our universities are on strike to demand quality education for our children. The lecturers did not go on strike because of their interests alone; they are also demanding a better environment for learning.

“It’s quite a shame that our children, brothers, and sisters have been at home for about five months since this strike action by the university lecturers commenced.”

In  Abia State,  the members of the NLC marched in solidarity with the striking lecturers across the major streets of Umuahia, the state capital, on Tuesday.

In his remark, the ASUU coordinator for Owerri Zone, Uzor Onyembinama, said, “As we speak, we have rolled out five agreements. We are shocked to hear from the Minister of Education saying that there is no agreement reached between the Federal Government and ASUU.”

Recall, ASUU on February 14 embarked on industrial action to press home their demands for better welfare of members, revamping of the nation’s education sector, and implementation of the 2009 agreement among several others.

The protesting workers in Imo State who took off from the NLC secretariat in new Owerri marched through the city, causing gridlock, as they proceeded to the Government House

They sang solidarity songs and insisted on speaking to the state governor, Hope Uzodiinma.

The governor bridged his convoy, came down, listened to NLC Leaders, and later addressed the protesting workers.

Members of the Rivers State council of the NLC also made good their threat to stage a solidarity protest over the lingering strike by university lecturers.

NLC members in their large numbers converged at the State headquarters of the NLC from where they began the protest.

This is despite an earlier announcement by the Rivers State Head of Service warning workers against joining the protest.

Over 40 affiliate unions of the NLC including student unions joined in the peaceful protest held in the Kaduna state capital amid tight security.

Members of the NLC protested in Ibadan   the Oyo State capital, in solidarity with the strike action of the Academic Staff Union of Universities.

The scores of protesters who stormed the street carried placards with several inscriptions that called on the relevant agencies to attend to the demands. The protests which started on Tuesday may continue for three days across the county.

The NLC may be compelled to embark on strike if the federal government fails to enter into meaningful deliberation with ASUU on the resumption of academic activities in the government owned universities.