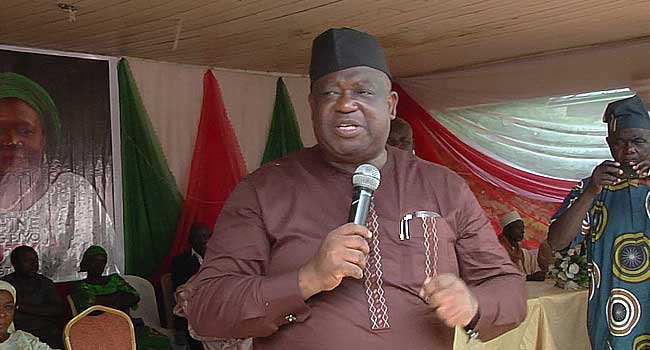 Mutfwang promises to uplift sports on the plateau

Mr Caleb Mutfwang, Peoples Democratic Party’s (PDP) governorship candidate in Plateau says he will complete work on the Jos Township Stadium abandoned more than 32 years ago if elected in 2023.

He also promised to make sports a big business in the state if given the mandate.

The governorship said he would ensure the right investment in sports so as to productively engage the youths.

According to him, sports is money spinning venture that can empower youths and generate huge revenues for the state.

“The Zaria Road Ultra-modern Stadium will be my priority because it has every sports facility ranging from football to volleyball.

“By the grace of God, if PDP comes into power, we intend to complete what we started.

“Apart from the revenue aspect, sports will provide an avenue for the abundant talents on the Plateau to thrive and help in our efforts to unite the people and promote peace and peaceful co-existence,’’ Mutfwang said of his promise to uplift sports on the plateau.

Also speaking at the occasion, Mr Gideon Danderemg, Chairman, Jos South Local Government, commended the organisers for putting together the tournament which he said had further united the people of the area.

Dandereng who was represented by Mr Simon Dunkat, Leader, Jos South Legislative Arm, promised to continue to prioritise sporting activities in the area.

The tournament usually holds during the summer break of European football leagues, especially the English Premier League to unite Plateau people and to also assist the young.

Teams that participated in the competition adopted the names of Nigeria Professional Football Leagues sides.

This year’s tournament was the sixth in the series. (NAN)