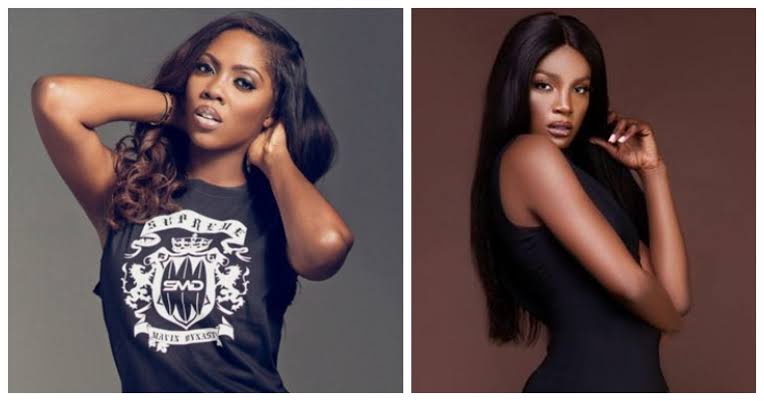 Popular Nigerian Singer, Seyi Shay has revealed her reaction to a curse she claimed her rival Tiwa Savage placed on her during their fight a year ago.

Seyi Shay who welcomed her baby in April disclosed her reaction in an Instagram post on Thursday while answering a question asked by a fan.

The anonymous had fan asked: “When you gave birth did you laugh at Tiwa Savage and that stupid curse she placed on you about not experiencing motherhood?”

Responding to the fan, Seyi Shay said she did not laugh at Tiwa Savage instead she bowed in reverence to God.

“The devil is a liar. Whose report will you believe? I believe the word of the most high God. God is faithful. I did not laugh, I bowed in reverence to Oluwa. Never forget wetin. He says ‘yes’ nobody can say no.”

A video of the two women clashing and exchanging swear words went viral in June 2021.

According to Seyi, she was at the salon to get her hair done for her Nigerian Idol appearance on Sunday, June 13.

The 36-year-old said she felt tension in the salon and decided to walk over to say hi to Tiwa and they both exchanged pleasantries.

The ‘Big Girl’ singer who revealed she was shocked by the unexpected outburst stressed that Tiwa’s beef with her was not about the #FvckYouChallenge verse she recorded in April 2019 as she confirmed that they have met each other more than twice since her #FvckYouChallenge and they exchanged pleasantries on all occasions.

Seyi Shay also noted that the part she did not see on the trending video is where Tiwa said in Yoruba “Seyi you won’t have a child I heard you are looking for a child, God will not give you a child because you have a bad spirit”.

Tiwa was, however, seen in the video swearing that God should take her own son Jamil Balogun if she ever talked bad about Seyi Shay in the media.