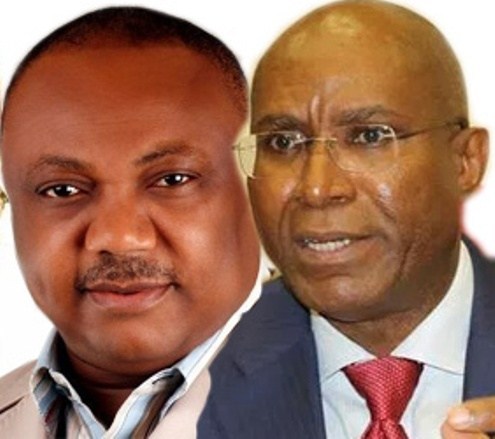 FEW days after the Delta State election petition tribunal upheld the election of the state governor, Dr. Ifeanyi Okowa of the Peoples Democratic Party, PDP, an unusual silence has enveloped the camp of the All Progressives Congress, APC in Delta State.

The silence has been accentuated with concerns over the relationship between top leaders of APC in the state.

Even more, the nominations into the board of the Niger Delta Development Commission, NDDC, have also upset permutations in the state chapter of the party given the positioning of some party leaders for the positions.

Though the Deputy Senate of the Senate, Ovie Omo-Agege who is close ally to the party’s governorship candidate in the 2019 governorship election, Chief Great Ogboru, had boasted sometime in August that Ogboru will be declared winner at the end of the arbitration at the election tribunal, chairman of the tribunal, Justice Suleiman Belgore upheld the election of Okowa and dismissed the petition of Ogboru.

Responding to the ruling, the APC in a statement stated that the APC family in the state expected a total liberation of the State from what it described as “the shackles and political hegemony holding the state down for two decades now.”

The statement which was signed by the publicity secretary of the party, Sylvester Imonina, said: “The Party as a law abiding political entity, though felt pained by the judgement, believes all hope is not lost, as it shall follow the due process of law in achieving its goal/target, as the Nigerian constitution and the electoral act provide the necessary remedy.

“Consultations are ongoing as to the next/best step to follow in respect of the judgement. That is, exploring every available legal option(s)/an appeal of the said judgement to the appelate court as the Party is of the firm belief that Deltans shall have cause to smile again.”

Despite this reassurance by the party, reports have it that chieftains of the party in the state are not happy with the role Ogboru played during the 2019 General Election which was his worst performance in his six-time serial run to become governor of the state.

It was alleged that funds meant for the 2019 General Election were held back leading to the poor outing of the party during the polls.

APC groups in the state under the aegis of Coalition of Delta APC Support Groups, accused the candidate of not putting forward all the money meant meant for the state.

Convener of the group, Daniel Ekuigbo during a press briefing after the election, said: “It is of public knowledge that Great Ogboru presented a budget of N3billion, which was over funded and availed to him. There was no evidence anywhere that he spent N1billion for the elections.”

Ekuigbo stated further that Ogboru acted like a man determined to fail at all costs by ignoring and refusing to carry along even the old APC members who joined him with Prophet Jones Erue adding that he stubbornly chose to work only with the few Labour Party people who he came into the APC with.

“Even at that, he couldn’t manage things properly within his inner circle as there were open hostilities and in fighting between his core people and those of Sen. Ovie Omo-Agege on one hand and former Gov. Emmanuel Uduaghan’s people on the other hand,” he stated.

Other allegations were that Ogboru without consulting leaders of the party, nominated his close allies to lead his campaign council as well as his running mate without adequate consultation of the party big wigs.

In a bid to compensate him, reports have it that Ogboru had positioned himself to for a ministerial nomination or as the next Managing Director of the Niger Delta Development Commission, NDDC. However, the nominees by the presidency for the position turned out to be a shocker for him.

As usual at the end of every election, Ogboru has been silent and has not been seen at political gatherings.

Surprisingly, his ally, Senator Omo-Agege, last Sunday led a litany of APC chieftains in the state including the only House of Representatives member in the state on the platform of the APC, Hon Francis Waive and the MD designate of NDDC, Olorogun Bernard Okumagba to the thanksgiving service of chieftain of the PDP, Hon Michael Diden as the chairman of the Delta State Oil Producing Area Development Board, DESOPADEC.

Diden who is a devout supporter of Governor Okowa, had pulled chieftains of the PDP to the event and Omo-Agege leading the pack for APC.

Omo-Agege’s presence at the event has further heightened speculations on his political romance with Okowa to the detriment of Ogboru on whose political clout Omo-Agege was reported to have emerged as Senator.

Speaking on his reason for attending the event amidst tongue-lashing from critics, Omo-Agege in a terse statement yesterday, said: “I attended a thanksgiving service of the Chairman of the Delta State Oil Producing Area Development Commission (DESOPADEC), Prince Michael Diden.

“Also in attendance were H.E, Governor Ifeanyi Okowa, Senator James Manager and other leaders in Delta State. The progress and development of the Niger Delta is paramount to my legislative agenda.”