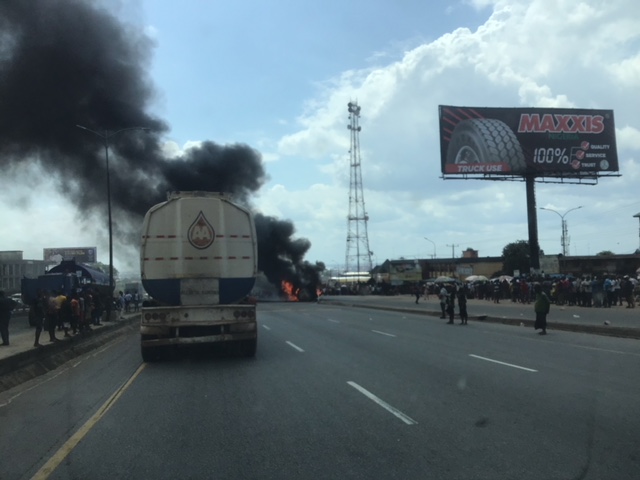 Traders at Ochanja Market, Onitsha, who recorded colossal damage due to Wednesday’s fire disaster arising from a tanker accident have blamed their calamity on poorly equipped Anambra State Fire Service.

Some of the traders who spoke to News Agency of Nigeria (NAN) on Thursday in Onitsha said the state’s fire fighters were not able to get to the disaster scene more than seven hours after the commencement of the fire.

NAN reports that the fire which started at the point a tanker laden with petroleum product fell in front of Toronto Hospital, Onitsha near Upper Iweka, spilled its content to Ochanja Market, a distant of more than 500 metres.

“The fire began at about 12.30 p.m. and lasted till 7.40 p.m. when it was finally put out through individual efforts and help from fire fighters from Asaba, Delta,” Vincent Ugochukwu, a trader at Ochanja market said.

Ugochukwu said he lost everything in his shop before the intervention of the fire fighters from Asaba who quenched the inferno.

NAN reports that Ochanja, the second largest market in the state has more than 10,000 shops and was almost razed as many traders were sighted clearing the debris.

Chief Godswell Anyanwu, former Chief Securiy Officer at Ochanja, said everything in his shop valued more than N12 million all got burnt.

Anyanwu, who deals on Electronics, noted with regret that if Anambra had efficient fire fighters the fire would not have reached Ochanja.

He also said it was painful that  in spite of the huge revenue government collects from the markets in Onitsha it could be that mindless to provide fire equipment.

He added that it was the combined efforts of residents and fire fighters from Asaba that ended the fire.

The ASMATA boss advised affected traders to be calm, and wait for further information from government

He said he was hopeful that the Gov. Willie Obiano would do something to mitigate the impact of the disaster on the victims.

He, however, condemned the attitude of some miscreants who threw stones and pebbles on government officials and security agents during the incident.

NAN learnt that Gov. Willie Obiano, who visited scene of fire incident at Upper Iweka, Onitsha, to sympathise with victims could not reach Ochanja due possible fear of unruly conduct by the angry traders

Obiano was quoted in a statement issued to journalists in Awka to have been saddened and sorry for what happened.

He said that the government would assist those affected and help to bury the woman and her baby that died.

The statement noted that a committee to unravel the cause of the disaster had been set up by government.

Obiano assured that the government would revamp the fire service and provide more equipment for fire fighting.

“The people and government of Anambra are very sorry for this sad incident. We will ensure that compensation is paid before Christmas. We will celebrate Christmas in peace,” he said.