The Sad Fate Of Southerners In APC

The Sun, Moon, And Stars

Okowa And His Southern Governors' Declaration 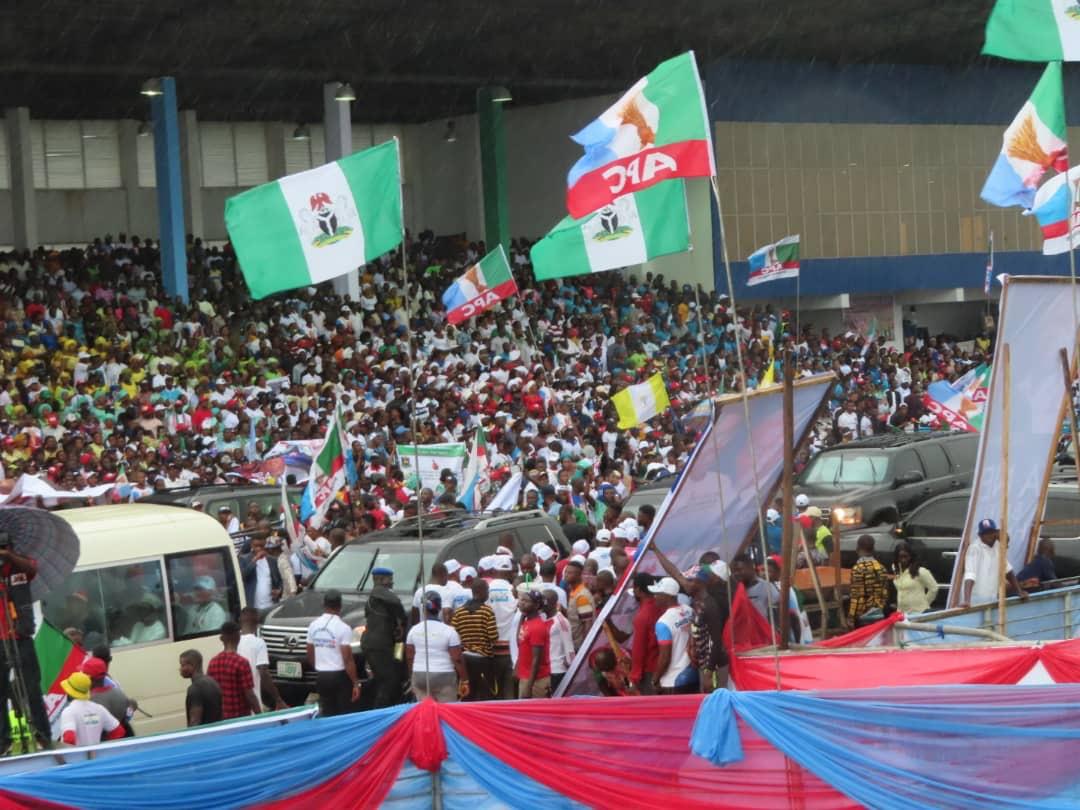 “Men make history, but, not just as they please.”

Robert Fowler representing Lagos State is out as the head of the Federal Internal Revenue Service, FIRS. He was replaced by Abubakar. The former boss of the Social Intervention Programme, SIP – a fellow from Ogun State, was not only removed as the administrator of the legacy programme of the Buhari government, the job was taken North.

In addition, some thirty members of the former Oga were shoved out of the Aso Rock gate. The Chairman of the All Progressives Congress, APC, from Edo State now owes his survival in that position to one word from the President. If Buhari says “Go”, it is back to Edo State or personal exile out of Nigeria.

A former PDP Governor in the South East decamped to APC; he was elected Senator and was given the topmost post for an Igbo during this period. He felt safe. Today, the red carpet has literally been removed from under his feet. Within a few hours on a sad day, he had changed from a bullet-proof and air-conditioned luxury car to the old jalopy of the Correction Service.

His designer outfit would have been replaced by those supplied by Okrika tailors. A Minister from the Niger Delta has established a Railway University, to be named Buhari University later, in Katsina State. Carrying sycophancy to the most ridiculous depths, our Southern brother told Nigerians, presumed to be idiots that the Chinese handling our railway contracts will pay to build the university.

Don’t laugh. This is what happens when individuals who were once regarded as men become desperate and lose their balls. Just wait; the Chinese contractors will soon request for an upward variation in the original contract sum more than the N18 billion they proposed as the cost of building the University for Nigeria free of charge!! Mugus in government never seize to amaze me.

The truth is, the APC is now running as a Sole Proprietorship. There is only one owner. All the rest have become servants – even the co-founder from the South West who thought he was a genius when he started the ball rolling to get Buhari elected as President so that he could be Vice President. He failed to make it as VP; now all the people he was allowed to plant in key positions are being weeded out one by one.

He might be next because the Bob Fowler saga is not yet over. From the stories reaching us, the former boss of FIRS might have to answer some questions about the activities of the FIRS which were regarded as questionable during his tenure. Those questions partly or mostly might explain why he was not re-appointed. They may also implicate some other top people, especially from the South, who according to information available might have been involved in tax evasion.

At any rate, Fowler is out and he will not be the last nominee from the South West to be shown the gate of Aso Rock any time soon. The obvious question is: what will be the fate of our Southern brothers who created the “Frankenstein” monster which is now set to devour them all.

Oh! What a tangled web we weave/ When first we practice to deceived.”

In 1994 when inaugurating his own confab, General Abacha had assured the civilians who were both elected that he was starting a political programme “in which we [the military] shall not be participants.” The participants who I had earlier dubbed “the ship of fools” erupted into thunderous applause. I was horrified.

Like Honore de Balzac, 1799-1850, I was “beginning to wonder how many fools it takes to make the term “My Fellow Citizens.” Prominent Nigerians attended Abacha’s confab. Professors, Senior Advocates, thoughtful political leaders and a smattering of old soldiers. Yet, they stood up and clapped for more than fifteen minutes while Abacha accepted the kudos. The dictator knew he had successfully deceived the delegates. He could go on and let his diabolic plans for self-succession unfold. I was furious.

The following Sunday, in SUNDAY VANGUARD, I wrote an article titled IF YOU BELIEVE THAT YOU WILL BELIEVE ANYTHING. The contents of that article which I cannot now lay my hands on can be summarised as follows.

First, it is probably true of all mankind that “The only prize much cared for by the powerful is power. The prize for the General is not bigger tent but command.”(Justice Oliver Wendell Holmes, 1841-1935, VBQ p 196). With power already in his hands, after toppling Chief Ernest Shonekan, I was certain Abacha would not voluntarily relinquish it.

I warned the delegates not to be deceived because the confab was just a distraction meant to keep politicians busy while the strategic General completed his plans to remain permanently in office. I told the participants that nothing they do at the confab will compel Abacha to leave voluntarily. I finished the article by telling people like General Shehu Yar ‘Adua that anybody who nursed the ambition to become President of Nigeria must first of all assume that Abacha will be his major opponent — if there is an election at all. And that election will be rigged in favour of Abacha.

That article paved my way to my first detention under the Abacha regime. Little did I know that I had stumbled on the truth. My interrogators, for two days, were anxious to know “who leaked the secret?”

Later, I got to know that late Ikoku had advised Abacha to serve the delegates and the entire country that deception about not participating in the elections that would follow. On the very day of inaugurating the confab, finishing touches were being put to the plan that would lead to Abacha’s self-succession.

History would record that the Abacha regime established five political parties – all of which were funded by the Federal Government. The leaders of each party were to be approved by the FG.

Candidates were to be screened by the National Electoral Commission of Nigeria, NECON, which had absolute power to determine who could contest in the elections. Even the constitution of each of the political parties was dictated to them by the regime. To cut the story short, Abacha was the sole owner of the five entities which the late Bola Ige called “five fingers on a leprous hand.

Those old enough to be aware of what happened at the time would recall that June 9, 1998, was the day, Chief Arthur Nzeribe had convened a meeting of all the National Assembly members elected on the platform of the five parties. At the gathering Chief Ebenezer Babatope – an elected Senator – had been selected to move a motion that ALL the political parties had adopted Abacha as their candidate.

By then the “ship of fools” had been disbanded and some of the delegates had joined the five Abacha parties. The constitution they proposed had been passed to a small group of legal draftsmen who had given the President absolute powers over everybody.

It was only providential intervention which saved Nigerians. Babatope never got to read his address scheduled for June 9, 1998 – in which undoubtedly he would have told the entire world that the murderous kleptomaniac he was imposing on Nigerians was actually God’s gift. Till today Ebino Topsy (as we called him before he fell from grace to grass) cannot release to the public what he was going to read on June 9, 1998.

In 2006 what we thought was a joke was taking shape as reality. Nigerians were told that somebody was nursing a Third Term agenda. Since our constitution allowed a President to serve only two terms , a constitutional amendment would be required to render the third term legal. Soon enough, the FG which had resisted all  entreaties to have the 1999 Constitution amended was ready to fund it.

As usual, another “ship of fools” was floated which after pretending to be making far reaching amendments to the constitution allowed for the President of Nigeria to serve three terms. Bribes were offered to members of the National Assembly; a bag full of money was on display in the House of Representatives; delegates for the final draft were reportedly offered $75,000. Everything was done to change the constitution and allow the incumbent President to continue in office. The plot failed when the proponents of what would have been the beginning of Life Presidency could not get two thirds of the Senators to vote for it. We were again saved by Providence.

“Those who do not remember the past are condemned to repeat it.”

We are again on a familiar road. Rumours of third term ambition are again being circulated. Just as Abacha pronounced that “we of the present administration will not be participants” and still went ahead to capture the transition until 1998 and somebody swore not to have a third term ambition, yet established House No 7 in the Villa as command post, we are receiving denials about a third term ambition. Whether or not you believe the denials right now, my advice is to wait and watch. Don’t let your guards down. Two reasons account for this.

First, those old enough to remember should recollect the Youths Earnestly Asking for Abacha, YEAA,  led by a fraudulent young Igbo man from nowhere. This was followed by a phoney two million man march for Abacha – all in a bid to convince the gullible that most Nigerians want Abacha to succeed himself. There is no shortage of youths ready to lend their support for such bogus rallies – especially if their palms are well-greased.

Second, in all fairness, the South East should produce the next President. But, plans are afoot to ensure that a conflict arises between the South East and the South West. Furthermore, potential candidates from the SW zone are being discredited. In the end, we might be confronted with only one choice – another Northern candidate. In that case only one candidate will serve the purpose….

A word is sufficient.

“The ‘Yes-man’ is the enemy. Your true friend will argue with you….”

One of your close subordinates, doing what detestable sycophants know how to do best told the world that he is for you all the way. With all due respect, Sir, I cannot go that far and no honest man should. Let me give you two reasons.

One, no man is infallible. Most leaders fail because they gather around them people who treat them as if they are God — who alone cannot make mistakes. You can and you have made a lot of them. I will go with you only if you are right. We part ways when there is disagreement. Thank God, I am not on your payroll.

Two, by failing to tell you the truth, they make it impossible for you to make amends when necessary. Napoleon, 1769-1821, the French Emperor and conqueror, attributed most of his success to the fact that he always told his officers “Bring me the bad news quickly; I can wait for the good.” They don’t tell you the bad news. Consequently, you are out of touch with reality.

Still, Baba, I want to wish you many happy returns.

NOTE: The books are available at CSS Bookshops, VANGUARD Abuja Office and MM2 as well as GATT Aviation airports in Lagos.