Port Harcourt And The Menace Of Black Soot 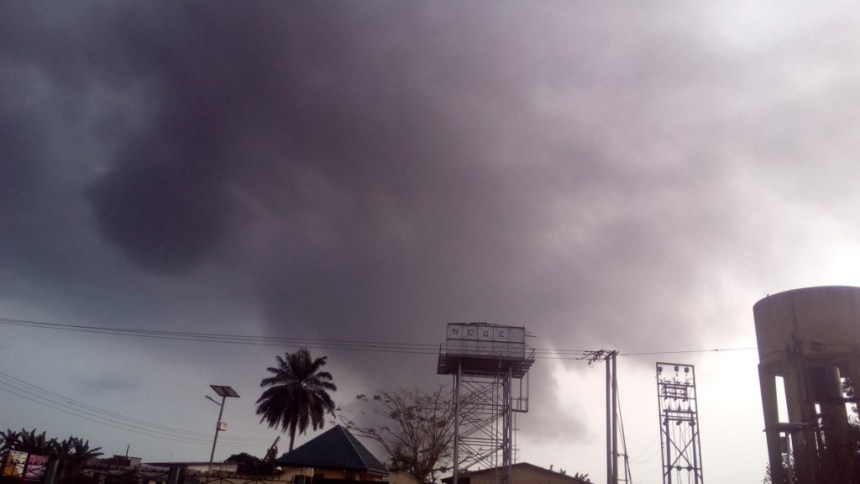 As early as 5am every day, Harry Nwokoma, a commercial bus driver, is on the road in Port Harcourt. He needs his job to bring in money for his wife, two children and aging mother.

But in 2018 Harry developed constant breathing difficulties. Eventually, doctors told him this was as a result of black soot in the air, which had affected his lungs. Harry had to go about with a nose mask to protect himself from the harsh soot, and now works fewer hours. His health and his daily income have both been damaged.

Many residents of the city of Port Harcourt, the capital of Rivers State and home to over five million people, face the black soot on a daily basis. Driving through the streets, you cannot miss the dark, hazy sky. After an hour on the road, a black substance from the sky covers you and even gets inside your nose.

The deteriorating air quality in the Port Harcourt metropolis over the past two years, has caused a lot of public outcry and anxiety, says Dr. Giadom, Ferdinand from the Department of Geology, University of Port Harcourt.

Doctors in port Harcourt say they are seeing the health effects of the soot, with an increase in consultations for breathing difficulties, including asthma. Children and the elderly are most at risk. Environmentalists are also sounding the alarm, as the soot contains sulphur dioxide and nitrogen dioxide, which cause acid rain when combined with moisture.

The soot penetrates deep into the lungs, and can lead to serious health problems including acute bronchitis and aggravated asthma among children, heart attacks, and strokes, as well as premature death, says Okhumode Yakubu  from the Department of Public Health Sciences at New Mexico State University.

Inhaling the soot can also lead to “cancer as well as developmental and reproductive disorders,” Okhumode says.

Although researchers know why the soot is there, the government doesn’t seem to be able to stop it.

In February 2017, the Federal Ministry of Environment declared the air pollution an ‘emergency situation’ to try to address the problem.

In 2017, the Governor of Rivers State Nyesom Wike set up a Task Force comprising of a three-man committee whose principal duty was to investigate the source of the pollution and find a resolution.

Shortly after its inauguration, the task force swung into action and shut down three companies suspected to have been emitting black carbon soot in Port-Harcourt, according to a statement from the Rivers State Commission for Information. But the soot keeps coming.

The state government has said that the soot is caused by activities of illegal oil refineries, bunkers and burning of tyres.

The government also advised that residents should take such protective measures as “refrain from eating foods prepared outdoors, including roasted plantain and suya; avoid drinking rain or exposed water; ensure all foods are covered; keep doors and windows closed; ensure children are indoors and kept away from the floor; and, adopt use of face masks.”

An epidemiologic evaluation of this risk and its overall health effect on the exposed population in terms of morbidity and mortality is necessary to enable the government make informed decisions and to take further action,” says Yakubu. He adds that Nigeria’s rapid response to the 2014–2015 Ebola Virus Disease and successful prevention of its spread provides some lessons for addressing such environmental health emergencies noting that strategic action, including effective environmental risk communication, environmental audit, and monitoring is key.

“The Rivers State ministries of environment and health, together with academic and private organizations, needed to join together in a concerted effort and the government should provide up-to-date information on the problem,” he added.

In order to help prevent epidemic outbreak and protection of the environment as well as improve the air quality Bassey Justine Eyo a scientist from the Center for Disaster Risk and Development Studies, University of Port Harcourt, said there is a need for regular monitoring of atmospheric pollutants around the Port-Harcourt region to forestall the potential health and atmospheric related impacts of such air toxics in the region.

In his opinion, the government could stop the issue of illegal or artisanry refineries by granting licenses to the refinery operators. That, he says will enhance accountability, efficiency and effective monitoring and control of the refiners’ activities.

However, in January this year, during the commissioning of a laboratory in Port Harcourt to detect and analyse samples of oil spillage in the country, Rivers Deputy Governor, Dr Ipalibo Banigo, urged the Federal Government to speedily implement fully its policy on modular refineries.

“The establishment of modular refineries will help reduce pollution to the environment”, Banigo said.

Minister of State for Environment, Mrs Sharon Ikeazor while inaugurating the lab, also urged those that engage in illegal mining to come together and form a co-operative so they can apply for license to enable them do the business legally and help reduce the environmental pollution.

The National Environmental Standard Regulatory Agency (NESREA) has been monitoring the air quality describing it as bad as that of the most polluted cities says Professor Aliyu Jauro, Director General NESREA, “we are doing everything to ensure the cleanliness of the air by ensuring compliance. Recently the National Assembly passed a resolution for NESREA to look into the issue of the soot in the region and two programmes are currently in the pipeline tailored to address the soot menace,” he said.

He added that the federal government is engaging stakeholders and the public to sensitise them on the dangers of establishing illegal refineries.

Jimmy Adegoke, Director, Center for Applied Environmental Research (CAER), University of Missouri-Kansas City, USA says that a state of emergency should be declared on the incidence of air toxins in the atmosphere of the city. “People should wear face masks so that they inhale less of the soot and air quality models which is a mathematical simulation of how air pollutants disperse and react in the atmosphere to affect ambient air quality, should be installed to curb the menace,” he says.

Gloria Ogbaki is a science writer

Rivers APC: Peace, Not Attack Is Way Out – Princewill