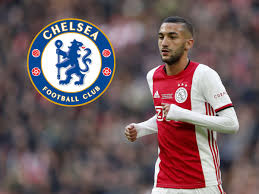 Ajax and Chelsea have announced the transfer deal for the attacking midfielder, Hakim Ziyech.

Ziyech will join Frank Lampard’s side, Chelsea on July 1.

The sum of €40 million (£33m/$43m) will be paid for the Dutch-born Morocco international, with the fee potentially rising to €44m (£37m/$48m) based on various sporting criteria, Goal reported.

The Moroccan is yet to sign personal terms with Chelsea, but he is expected to join the blues during the summer.

A statement on Ajax’s official website reads: “Ajax and Chelsea have reached an agreement for the transfer of Hakim Ziyech.

“The player will join the Premier League club on July 1st 2020 and will finish the season in Amsterdam.”