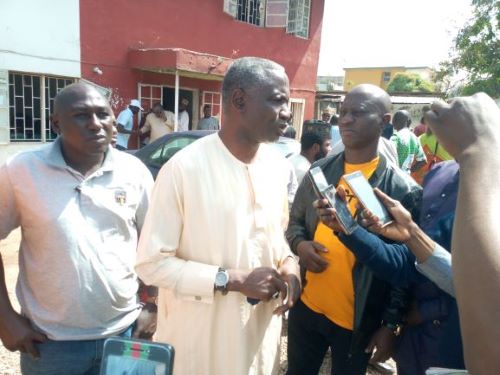 After dithering procrastination, a new chairman of the Peoples Democratic Party, PDP in Plateau State has emerged in the person of Yakubu Chocho, the immediate past state organizing secretary of the party.

Chocho’s emergence follows his adoption by the State Executive Committee, SEC of the party on Thursday. The move, however, followed the final consensus of the three musketeers of Senator Jeremaiah Useni, Senator Ibrahim Mantu and Mr. Damishi Sango.

Chocho’s emergence GreenWhiteGreen gathered came after the three men blocked the emergence of Chris Hassan, the vice-chairman of the party, Northern Zone who had earlier been brought forward by the State Executive Council, SEC to replace Sango who was forced out from the position.

However, Hassan was opposed by Mantu, Sango and Useni who insisted on someone else for the position of state chairman.

As a source said: “the three men had agreed that they would accept anyone produced by the former governor, Jonah Jang. But when Jang persuaded the state executive committee to present Hassan, Mantu, Sango and Useni objected and asked him to bring someone else.

“That was the reason for the failure to fill the office of chairman since Sango was forced out,” the source revealed as he observed an ego game among the principal leaders of the party.

No reason was specifically given for the rejection of Hassan. Some, however, felt that Hassan was too soft or that maybe because he served as a commissioner for two terms in the Jang cabinet.

However, Chocho, the new chairman one party stakeholder said, also served in the Jang cabinet.

“The three men were just trying to throw their weight around,” one party stakeholder said.