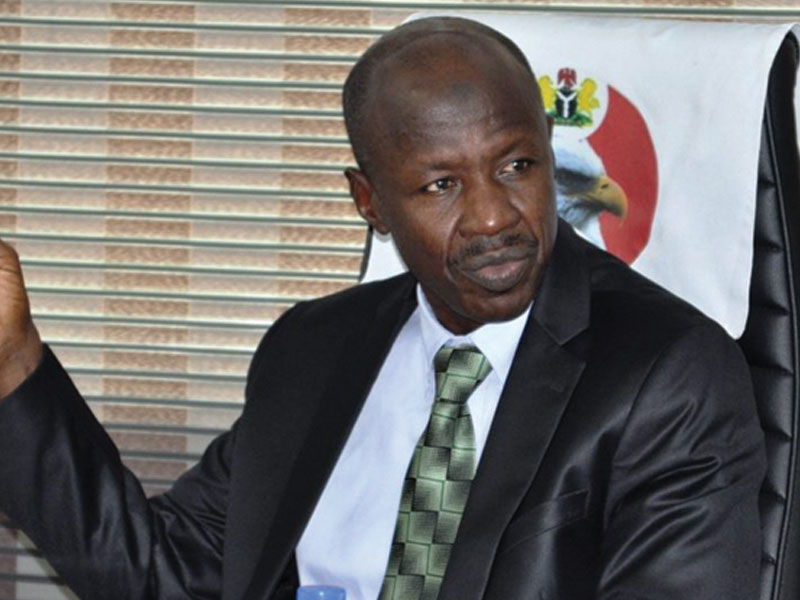 The Peoples Democratic Party (PDP) Friday asked Mr. Ibrahim Magu to step aside as acting Chairman of the Economic and Financial Crimes Commission (EFCC) to allow unfettered probe of corruption allegations raised against him by the Attorney General of the Federation (AGF), Abubakar Malami.

The PDP’s stance was upon the memo raised by Memo reportedly indicting Magu of financial scam which the party said has exposed the Buhari administration as corrupt.

The party said that it is the worst national embarrassment in the history of Nigeria, that the head of anti-corruption agency in an administration that prides itself on zero tolerance for corruption, is being dragged on allegation of diversion of recovered funds and fraudulent sale of assets seized by the agency.

“Malami’s memo has also exposed the credentials of President Muhammadu Buhari’s anti-corruption architecture, rubbished his standing as Africa Union (AU) Anti-Corruption Champion and shattered our national integrity in the international arena,” the PDP said in a statement issued by its spokesman, Kola Ologbondinyan.

“The world can now see that the much hyped anti-corruption fight of the Buhari administration, has been nothing but a huge fraud and a racket by certain persons in the APC administration to harass political opponents, intimidate and extort money from innocent Nigerians and steal public funds.

“Nigerians and the world have further seen why corruption has worsened under the Buhari administration, as copiously documented by credible international organization, including the Transparency International (TI).

“The PDP recalled that President Buhari had insisted on Magu as the EFCC Chairman despite his rejection by the Senate over reports by the Department of State Services (DSS), which raised certain integrity issues against him.

“The party further recalled that the DSS report, which was read out on the floor of the Senate, allegedly stated that “Magu has failed the integrity test and will eventually constitute a liability to the anti-corruption stand of the current government”.

“Our party therefore holds the latest report coming from none other than the Attorney General of the Federation; the EFCC’s supervising minister, who believably has unhindered access to facts and documents related to the anti-graft issues, must be received by President Buhari as a huge demand on him to clean up the system.”

“Moreover, following the allegation of diversion of recovered funds coming from the nation’s Attorney General, the EFCC Chairman has lost all moral rectitude to preside over our nation’s anti-corruption agency to investigate and prosecute others until he comes clean of these horrible allegations.”

“Our party also calls on Mr. Magu to immediately step aside and submit himself for an independent investigation in order to clear his name.”