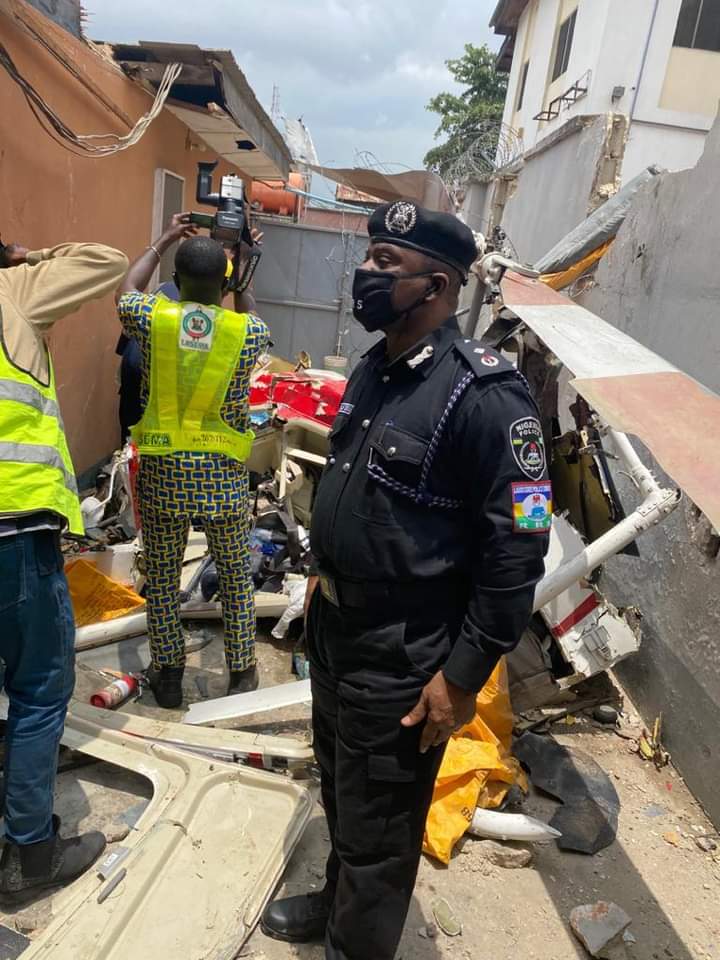 The Accident Investigation Bureau (AIB) says it has not recovered the black box at the crash site of the ill-fated Quorum Helicopter that occurred on Friday in Lagos.

The Bureau’s Commissioner, Mr Akin Olateru, made this known at a media briefing in Lagos on Tuesday.

The Nationality Registration marks 5N-BQW operated by Quorum Aviation. The flight originated in Port Harcourt with Lagos as its intended destination.

Olateru explained that the Helicopter type do not fall into the category that has a Flight Data Recorder (FDR) or the Cockpit Voice Recorder (CVR), because of the weight and the seat size of the aircraft.

He said: “We are aware of the speculations circulating on social media and other public fora with regards to the probable cause of the crash and AIB’s retrieval of the Flight Data Recorder (FDR), popularly known as the Black Box.

“We would like to clarify that AIB did not retrieve an FDR from the aircraft as the Bell 206 is certified at approximately 1,519kg (3,350lbs) and featured five seats.

“It does not meet the necessary criteria for an FDR and was not featured with one. The standard requirement for an FDR in any aircraft is 10 seats.

“It is extremely important to note that the aviation industry is the most regulated industry globally, and its operations are regulated in accordance with the International Civil Aviation Organisation (ICAO).

“The installation and application of FDRs in aircraft is guided by ICAO Annex 6, Parts 1 and 2.

“The basic standards for both Parts are essentially similar. Part 1 applies to commercial aircraft, while Part 2 is for non-commercial operations.”

Olateru explained that an FDR on the aircraft would have aided the investigation, but nevertheless, its world class trained investigators were competent to retrieve information about a crash from the wreckage.

He added that several other components of the aircraft, the site of the crash, communication with the ATC, and other documents on the aircraft and the crew.

The commissioner said from evidence gathered till date, the helicopter had a valid Certificate of Airworthiness (C of A) till Oct. 29, 2020 and Quorum Aviation had a valid Air Operator’s Certificate (AOC) that would expire Nov. 20, 2020.

Olateru said the bureau was notified of the crash of a helicopter in the Opebi area, near Lagos State at about 12:19p.m on Aug. 28, 2020.

The commissioner said its investigation team was immediately mobilised to the crash site shortly afterwards, and the following information had been obtained as at today.

“On Aug. 28, 2020, a Bell 206 BIII Helicopter with nationality and registration marks 5N-BQW, operated by Quorum Aviation Limited, started its engine at 09:15 hour.

“At 11:45 hour, the aircraft established contact with Lagos Tower, reporting maintaining 1000 ft and estimating the station at 12:18 h. In the ensuing communication, the pilot was advised of station weather.

“At 12:10 hour, the pilot reported sighting the airfield and was instructed by Air Traffic Controller (ATC) to report downwind for runway 18L. At 12:16h, the ATC tried unsuccessfully to establish contact with the aircraft.

“At 12:36hour, ATC was informed of the crash of the helicopter by MMF02, a MMIA fire station.

“At the crash site, two bodies were recovered. A third occupant was evacuated, but died later in the hospital,” he said.

Olateru noted that the aircraft wreckage was also recovered and then in AIB’s custody.

He added that the bureau had been receiving cooperation from Quorum Aviation Ltd., the owners and operator of the ill-fated aircraft.

The commissioner expressed his heartfelt condolences to the family and friends of the victims of the air accident and mourn the loss of our colleagues.

Olateru said an interim report into the accident would be released in the next four weeks.

He said AIB would like to point out that investigations were currently ongoing and conjecture at this stage was detrimental to the process.

Olateru said accident investigation was in phases and all procedures were performed in accordance with the Civil Aviation (Investigation of Air Accidents and Incidents) Regulations 2019 and the guidance of ICAO Annex 13.

He said at this instance and in line with the phases of accident investigation processes, AIB was at the stage of evidence gathering.

Olateru said, “as investigation into the crash continues, AIB needs and hereby solicits for the public and media assistance.”

He said the bureau urged the public to know that it would still be amenable to receiving any video clip, relevant evidence, or information any members of the public might have of the accident.

The commissioner said this gesture would assist the bureau to further with this investigation before the release of the final report.