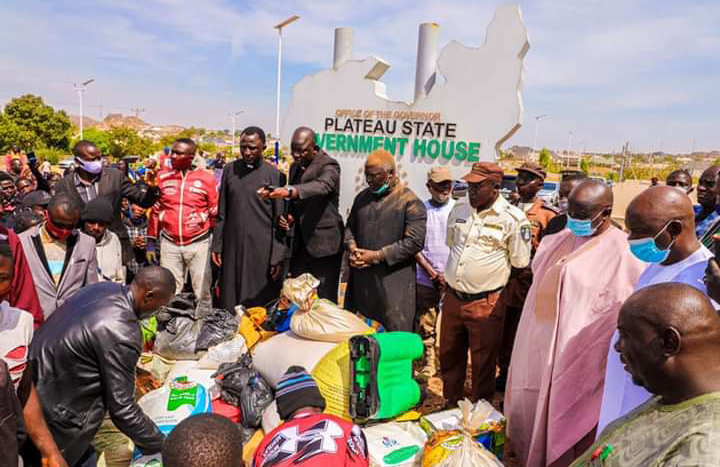 In a dramatic turn of events, some residents of Plateau State who carted away COVID-19 palliatives and vandalised public and private assets during the #EndSARS protest in the state have returned the looted items.

The state government disclosed this in a statement by Makut Macham, director of press and public affairs to the governor.

Makut said the residents who returned items were led to the Government House by Ezekiel Dachomo, a cleric.

He said the residents became remorseful after Dachomo preached against the recent looting of public and private properties in the state.

“Some people who participated in looting of items during the recent vandalisation of warehouses and other public and private properties under the guise of looking for palliatives have returned the items in their possession, asking for forgiveness from the Government of Plateau State,” the statement read.

“The repentant persons were led to the new Government House, Rayfield, Jos by popular evangelist of the Church of Christ in Nations (COCIN), Rev. Ezekiel Dachomo, who explained that they made the confession during a prayer revival orgainsed at the Zang Secondary School Bukuru, Jos South Local Government.

“The clergyman said over two thousand people came forward after hearing the gospel where he preached against the recent looting and vandalism which affected public and private properties in the State.

“This action according to him is not just an invitation of the anger of God against the suspects but the entire state. He said the hijack of the ENDSARS protest is a plan of the devil to scuttle the will of God for Plateau State which cannot be left without intercession.

“Touched by the message, some of the persons involved in the looting repented and decided to bring some of the items still in their possessions as a mark of restitution and plea for mercy from God and the Government of Plateau State.

“Rev. Dachomo appealed to the Governor of Plateau State Simon Bako Lalong to temper justice with mercy by granting forgiveness to the repentant persons who voluntarily came forward at the revival meeting with a promise never to partake in such acts again.”