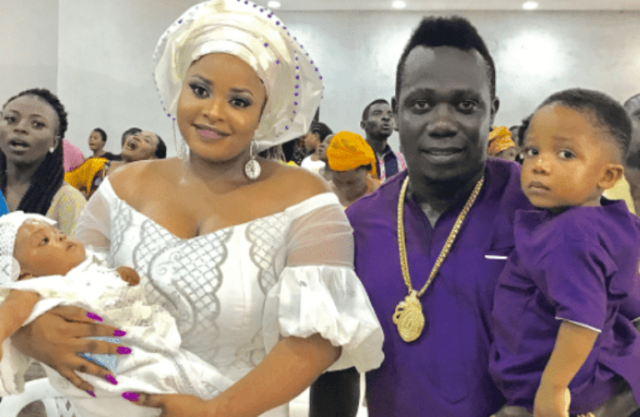 Less than 24 hours after popular Nigerian singer, Duncan Wene Mighty Okechukwu better known as Duncan Mighty, accused his wife and her family of plotting to kill him and take over his assets, the singer has dropped another bombshell saying that his DNA result of his daughter showed that he is not the father.

GWG recalls that the singer had earlier stated that his wife and her family members wanted to kill him so that they could take over his property.

“It was a day like no other, we had mad fun then we slept. By 1:40 am, while I was asleep, I was hearing Vivian’s voice, panting like someone who is at gunpoint. I stood up and held her asking her what exactly is going on; she was still shaking with too much fear. I asked her if it was a nightmare, she said no. I asked her again, is there something about you which I don’t know? She said hmmm! What about me? Is there not also something about you which I don’t know?

“I replied, let me go straight to the point… but she quickly said, let me talk before you. I agreed. She started first by saying, on several occasions in her family house, they always talk about my too many properties and investments at this young age, most especially being an only child; imagine if anything happens to me, that they choose by themselves the property to inherit, most especially her elder sister Maria Nwakanma (sic),” the singer had said.

This allegation had barely died down when the singer stated that DNA test disclosed that his wife had cheated with two men, Frank and Bright and one of them is the father of the baby.

He wrote: “Mr. FRANK is Bright’s best friend who is responsible for taking them to the highest and most powerful Juju.

“Frank and Bright are the fathers of Mitchell as DNA has proven me negative. On the 24th of November 2015.

“Five days after Icon was born, I gifted Vivian a car and months later they went to the first juju house and spent 1M which was used to build a hidden shrine.

“The existence of this hidden shrine is to hide everything they’re doing in case anyone tries to find out spiritually the person will see another face and not theirs.

“The most important thing is neutralize Duncan’s powers, which requires Frank and Bright to have sex with Vivian, the mom will be responsible for burying the charm and Maria is responsible for feeding the shrine then in exactly 4 years time, Duncan will get sick and die.

“But God failed them as that attempt resulted in the pregnancy of Mitchell. Now, the 4 years has come to pass Duncan Mighty is still not a Samson.

“All failed and the main reason I’m exposing this evil is because Mitchell’s life is in danger as they are planning to kill her for the truth not to prevail.”

This development has sparked reactions as many social media users have taken to their social media accounts to console the musician as they urge him to be strong. GWG brings some of their views below:

Why I Am Afraid Of Remarrying – Angela Okorie