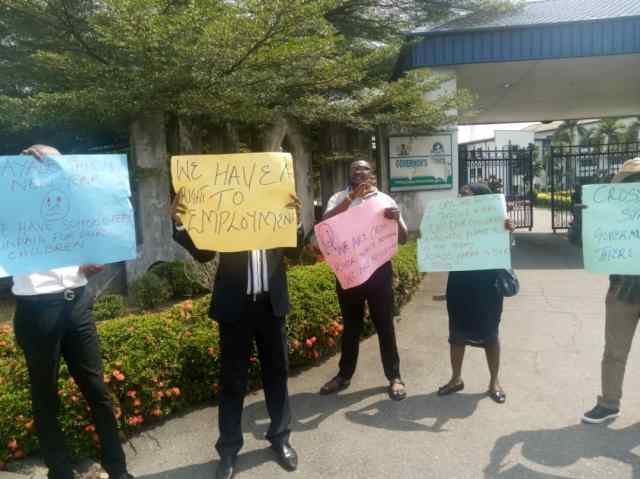 A Cross River Magistrate collapsed on Tuesday as the strike action by the judicial officers over unpaid salaries of 24 months entered the second day.

Richard Bassey collapsed at the gate of the governor’s office in Calabar as the protest gathered steam.

The News Agency of Nigeria (NAN) reports that 30 Magistrates dressed in their full regalia embarked on a peaceful protest on Monday.

They appealed to Gov. Ben Ayade to pay the salaries owed them.

NAN reports that the incident happened on the second day of the protest.

NAN also reports that Bassey was revived when his colleagues poured water on him and took him to a nearby hospital.

However, the news that a Cross River Magistrate collapsed in the bid to get his salary was one that was received with misgivings by his colleagues.

Speaking to newsmen after the incident, the Chief Magistrate of Cross River, Solomon Abuo decried what he described as ill-treatment meted to them by the state government.

Abuo said since they were employed, they had undergone several screening, adding that the protest was their last resort.

”We will continue to protest until we are paid.

“This is very embarrassing, in 2020 one of the Magistrates was arraigned before a fellow Magistrate over his inability to pay rent; most of us can’t pay our house rents and are squatting with colleagues.

“Is it wrong for one to serve the state as a judicial officers, are we supposed to go through this kind of humiliation,’’ he asked.

No official of the state government addressed the protesters since the protest began on Monday.

None was also available to respond to the controversy that a Cross River magistrate collapsed while asking for his salary.

Justice Eyo Effiom-Ita, Acting Chief Judge of the state, told NAN that he was aware that the Magistrates had not been paid for a long time.

Effiom-Ita said different presentations had been made to the governor.

“The governor said he did not give clearance for their appointment, so, he will not pay them; until the governor changes his disposition, there is nothing anyone can do,’’ he said. (NAN)