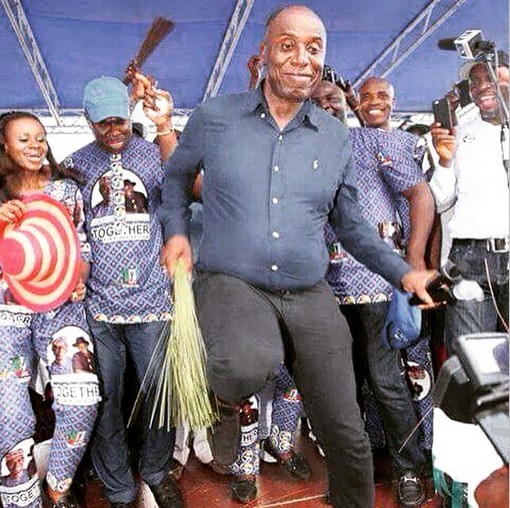 While repeatedly touring and making a show of restoring the country’s train services in the Southwest, the campaign train for the purported Rotimi Amaechi’s 2023 presidential aspiration has taken off from the hotbed of Boko Haram in the Northeast.

The first signs of the campaign for Amaechi to succeed President Muhammadu Buhari emerged after the Yobe state chapter of Amaechi Vanguard “23 inaugurated officials to pilot the affairs of the organization.

The organization has as its primary reason, the election of Amaechi as president in 2023.

Amaechi has since the advent of democratic rule in 1999 served two terms each as Speaker of the Rivers State House of Assembly, governor of Rivers State and presently as minister of transportation.

At the inauguration of the Yobe State executive of Amaechi Vanguard in Nguru, the state coordinator, Comrade Lawan Ali Yusuf said that the team is expected to coordinate all the activities and programmes of the organization throughout the state.

Lawan assured that the organization would focus on sensitizing the people of Yobe on Amaechi’s success in public office and would embark on a ward to ward mobilization ahead of the 2023 election.

Speaking while inaugurating the new executive, the National chairman of Amaechi Vanguard, Hon. Haruna Bature appreciated the support of All Progressives Congress, APC chieftains in the state towards the success of their agenda.

He especially applauded the erstwhile minister of foreign affairs, for his support.

Present at the inauguration were many political actors including former members of the Yobe State House of Assembly, former chairmen of local government councils and some APC chieftains in the state.

Following the inauguration, Mr. Bature paid a courtesy visit to traditional rulers, religious leaders and some APC chieftains including former minister of foreign affairs Hon. Jibril Maigari in their residences.

There was, however, no indication as to whether the campaign train was sanctioned by the minister.