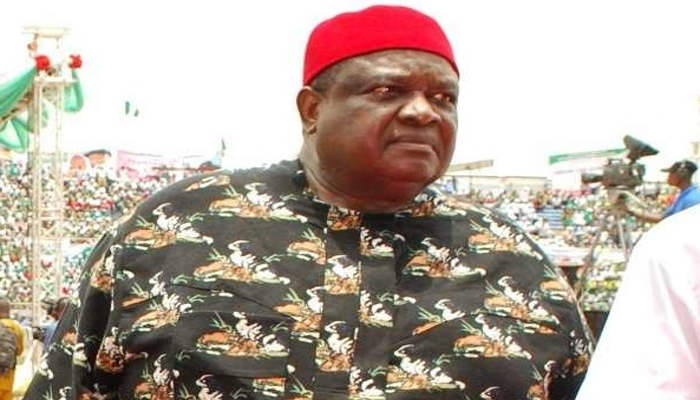 Iwuanyanwu spoke at the weekend when the leadership of the Coalition of South East Youth Leaders (COSEYL) conferred on him the title of grand patron in Owerri, the Imo State capital.

Quarreling with Kanu’s style, he said that unlike Odumegwu Ojukwu, Kanu would on his own take decisions or sometimes even take responsibility for actinons that were not committed by him or his group.

“Igbo youths must avoid circumstances that they do not understand. What IPOB did during the #ENDSARS protests was very heinous. Their leader went about taking responsibility for issues and destructions they knew nothing about.

“He also ordered his followers to kill some people in Igboland. If you give orders for another person to be killed in your place, don’t be surprised that your people will be killed also. There is no place in Nigeria that you can’t find an Igbo man. So, ordering the killing of anyone in your community is endangering your people.

Noting that Kanu was endangering $2 trillion Igbo assets outside the Southeast, he said:

He said that Ojukwu sought counsel before he declared Biafran secession and that that was the reason Biafra lasted as much as three years.

Iwuanyanwu said, “Ojukwu did not ignore elders and he never declared Biafra on his own. It was the people from all walks of life – the academia, businessmen, civil and public servants that called upon him to declare the state of Biafra and become its leader.

“That was why Ojukwu was able to hold Nigeria for three years without rebellion. Most of us who fought the war were intelligent, but we had to join and fight the war. We’re very proud that we fought that war.

“You (Nnamdi Kanu) can’t come on your own and declare Biafra and ask me, Emmanuel Iwuanyanwu, to follow you. Even in a monarchical system, people’s opinions are sought. What do you have that you are declaring war here and there? You are only endangering the lives of your brothers, the youth who you claim to lead. You have to come and seek advice from Igbo elders. They’re the people that will guide you.”