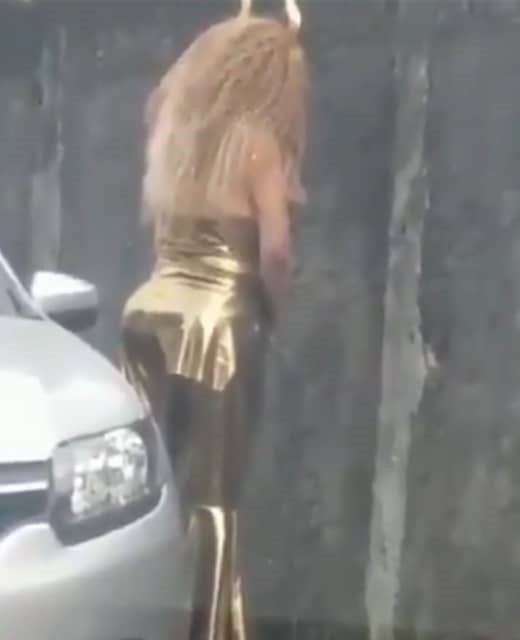 The crossdresser and alleged transgender, Bobrisky, was being called out on Tuesday after a Twitter user put out a video of him allegedly standing up to urinate as a male. The video allegedly of Bobrisky urinating as a male was also being swallowed by another controversy of identity.

The video posted on Tuesday morning immediately attracted controversy over the claim of Nigeria’s most reported transgender to have had a sex change and acting as a female in most of his social outings. He, however, came to his father’s birthday as a male with a fez cap to mask himself.

Some, however, alleged that the video put out on Tuesday morning was not that of Bobrisky.

Guys I thought Bobrisky is now a lady, why is he still using Nozzle   to piss… Rolling on the floor laughing Smiling face with open mouth Face with tears of joy.

The post immediately attracted reactions with some alleging that it was not Bobrisky.

Given the reported ongoing physical transformation of the bleaching cream distributor, GreenWhiteGreen GWG is unable to confirm if the video is that of Bobrisky urinating as a male.

However, the impression of the transgender ‘female’ standing up to urinate as a male was drawing the amusement of many twitter users many of whom were retweeting the video.

Bobrisky, real names Okuneye Idris Olarenwaju, had recently attracted the strong negative reaction of the Nigerian authorities with the director-general of the National Council for Arts and Culture NCAC, dubbing him a nuisance and a threat to African culture.

According to him he recently stopped Bobrisky from using his recent birthday party to launch the African chapter of an international homosexual lobby group.

“Do you know that the so-called Bobrisky was going to set up the African Chapter of Gay and LGBT or whatever they call it in Nigeria during his recently aborted birthday party? People from over 70 countries arrived in Lagos for the event.

“They were all at Ikoyi, preparing to launch it. We got a hint of it and had to put a stop to the event. I seized all the food and gave them to IDPs. If they had launched that thing, Nigeria would have been destroyed by now.