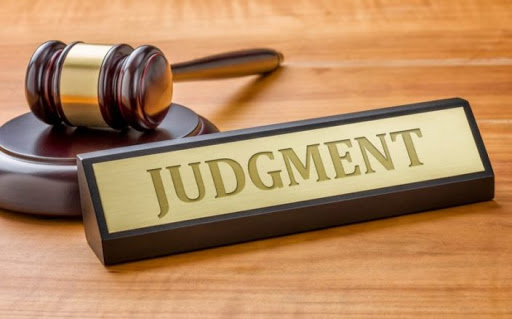 An Ikeja Special Offences Court on Tuesday sentenced Semasa James to a year in prison for forgery.

He was convicted for forging documents while he was the administrator of the estate of his late father, Oba Afolabi James of Kweme Land, Badagry.

The News Agency of Nigeria (NAN) reports that Semasa’ s Personal Assistant, Afolabi Kazeem, who was charged with him was, however, discharged and acquitted.

Justice Oluwatoyin Taiwo in her judgment found Semasa guilty of  uttering  documents and sentenced him to a year in prison.

She said: “Based on the oral and documentary evidence, I find that the prosecution failed  to prove the count  of stealing beyond reasonable doubt.

“I find the defendant guilty of uttering a false document.

“I find the first defendant not guilty of fraudulent disposal of trust property.

“I find the second defendant (Kazeem) not guilty of receiving stolen property as the prosecution failed to prove beyond reasonable doubt that the said N2million was stolen and he received same knowing it was stolen.

“The first defendant is hereby sentenced to one-year imprisonment or N450,000 fine.”

Prior to convicting and sentencing the first defendant, the judge had said that the case could have been resolved amicably withn the family without the warring princes and princesses resorting to litigation.

“It is unfortunate that such a problem cannot be resolved amicably, instead of washing  the family’s dirty linen in public.

“One wonders what legacy the elders in the family are leaving behind for the younger ones.

“It is suggested by the court that the family wipes clean the slate and starts afresh,” she said.

The judge suggested that to avoid future strife, the family should appoint more administrators to administer the estate of the  late Oba Afolabi James.

Taiwo said that the administrators should be transparent to the beneficiaries of the estate and a neutral body should also manage the accounts, open fresh books and records to avoid mismanagement of funds.

The Badagry prince faced a seven-count charge  that bordered  on forgery, uttering of false document and fraudulent disposal of trust property proffered against him by the Special Fraud Unit (SUF) of the Nigeria Police Force.

His personal assistant faced a charge of receiving stolen property.

In his allocutus (plea for mercy)  thr Defence Counsel, Mr Martins Oyigbo, asked the court to temper justice with mercy.

“He is a first-time offender my lord and he had no intention of defrauding the family.

“My lord should please give an option of fine as the family will take the advice of the court and resolve the matter amicably,” Oyigbo said.

According to the SFU prosecutor, Mr Oluwafemi Olabisi, Semasa had fraudulently converted N500 million property belonging to the late king to himself  between Year 2000 and Year 2017 and deprived his 26 siblings of their inheritance.

He was accused of illegally leasing another property located  at Plot 282 Ajose Adeogun St., Victoria Island, Lagos to Ecobank Plc.

Semasa also allegedly forged some purchase receipts of his late father’s property as well as the signature of the late king on the Corporate Affairs Commission documents of CAJ Industrial Enterprises.

Also, the SFU said that Kazeems had allegedly received stolen estate funds from the first defendant.

Kazeem is alleged to have connived with Semasa to defraud the beneficiaries of the late king’s estate of N150 million, which was part of  the proceeds from the sales of a property located at Dideolu Estate, Victoria Island, Lagos.