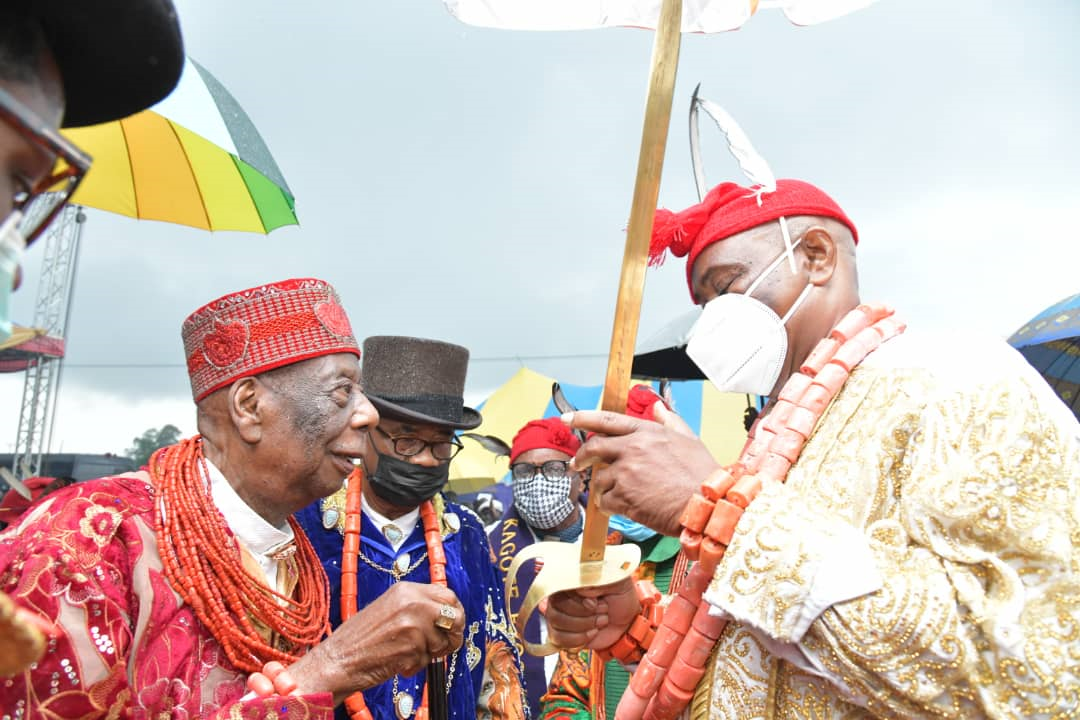 Governor of Rivers State, Nyesom Ezenwo Wike (right) being conferred with the title: Mene Kwalenu 1st of Ogoni, (a benevolent king), by the President of Supreme Council of Ogoni Traditional Rulers, His Royal Majesty, King G.N.K Giniwa, during a grand reception in honour of the Governor in Bori on Saturday.

He said those opposed to resolutions taken by Southern governors in Asaba, Delta State, should realise that no section of the country is inferior to others.

Governor Wike stated these during a grand reception held in his honour by Ogoni nationality in Bori, Khana Local Government Area on Saturday.

The governor declared that he has taken further steps to fulfill the resolutions reached by Southern Governors in Asaba.

“We have taken a position and no going back. Enough is enough. We are not second class citizens of this country. We also own this country.”

Not impressed with slow pace of the Ogoni environmental remediation, the governor charged  the Hydrocarbon Pollution Remediation Project (HYPREP), which is saddled with the responsibility of the cleanup of polluted sites in Ogoni, to relocate its operational office from Port Harcourt to Bori, the headquarters of the Ogoni people.

Governor Wike recalled that when he launched his quest to govern Rivers State in 2014, he received tremendous support from Ogoni nationality. And in appreciation, his administration has graciously fulfilled the promise to dualise the Saakpenwa-Bori-Kono Road and has gone further awarded contract for the phase two of the project from Bori to Kono valued at N14 Billion.

Governor Wike, who acknowledged that the people of Ogoni nationality have remained steadfast in their support of his administration.

The governor directed the Commissioner of Power and in coming chairman of Khana Local Government Area to ensure the electrification of all communities in the council that are not connected to the national grid within the next five months.

He charged the incoming chairmen Khana, Gokana, Tai and Eleme to endeavour to initiate and implement projects that will enhance the wellbeing of their people.

President of Kagote, Emmanuel Deeyah, said the reception was organised  in honour of the governor because Ogoni people are beneficiaries of the unprecedented infrastructural developments witnessed in the State since he assumed office.

“This is not a gathering of the Ogoni people from which any Ogoni man that is proud to be an Ogoni man can afford to be absent.

Former president of the Movement for the Survival of the Ogoni People (MOSOP), Ledum Mitee, said Ogoni people will remain eternally grateful to Governor Wike for his developmental strides in Ogoni.

Mitee explained that during his reign as MOSOP president, he had appealed to all past Rivers State governors to dualise the Saakpenwa-Bori-Kono Road but none except Governor Wike harkened to him and other Ogoni leaders.