How Masquerade Group Clashed With Worshipers In Osogbo 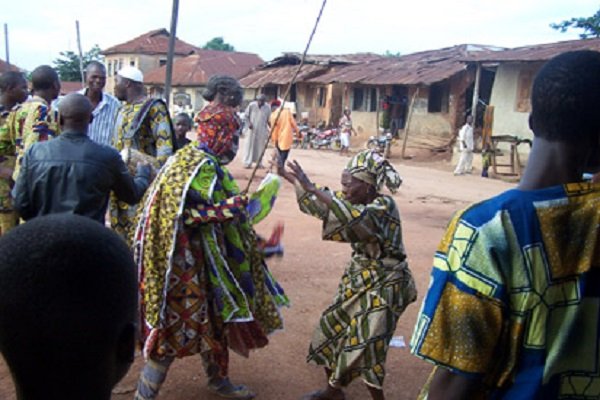 The Osun Police Command on Monday confirmed the death of one person during a clash between a masquerade and his followers and Muslim worshipers in Osogbo on Sunday.

According to Osun Police Spokesperson, SP Yemisi Opalola, many were also injured when Muslim worshipers, that were having their prayer in their mosque, got into a fight with the masquerades who took their procession past their mosque.

Opalola said though the cause of the fight could not be ascertained yet, she said the state Commissioner of Police, Olawale Olokode, has, however, invited the two fighting group for dialogue.

She also stated that some persons have been arrested in connection to the incident and that investigation was also ongoing on the development.

You would recall that about nine persons (including some underage children) were injured, as it was reported that many were shot during the fracas.

A masquerade and his followers were said to be passing through the Oluode Aranyin’s compound, Osogbo, where a mosque is located.

The Muslim worshippers, who were having prayers under a canopy near their mosque, were alleged to have been attacked by the masquerade followers which lead to a fight.

Related Topics:Masquerade Group
Up Next

Rumour Of Buhari Demise, Jubril As His Replacement Ridiculous – Obasanjo