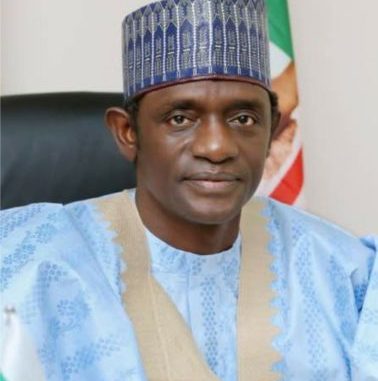 The APC Caretaker Committee Chairman in Kwara, Alhaji Bashir Omolaja Bolarinwa (BOB), has urged President Muhammadu Buhari to caution the Mai Mala Buni led leadership of the party against causing the implosion of the party in the state.

Bolarinwa gave the warning in Ilorin on Sunday while hosting women in APC at his residence.

The News Agency of Nigeria (NAN) reports that the chairman and his wife, Alhaja Aisha, hosted selected women leaders drawn from the 16 local government areas of the state to thank them for supporting the party.

Bolarinwa told newsmen on the sidelines that he was disappointed with the way and manner the Mai Buni Mala-led national caretaker executive have handled the Kwara crisis thus far.

Calling on Buhari to intervene, he said:

“I enjoin President Muhammadu Buhari as the leader of the party to caution Buni and his colleagues, so as to harmonise all interest and guard against a calamitous implosion and mass exodus from the party,” he stressed.

According to Bolarinwa, as loyal party members, his group has high respect for the leadership of the party.

He said at the time of elections, everybody, including the national officers will hold on to their states.

“We are in Kwara and we know what operates here and for that they should listen to us.

“If they should go ahead with the congress without carrying the majority of members of the party along, we will come up with a plan to show them that we are still in the party.

“The option open to us is we’re coming up with a concrete plan, we still have hope in this party and we’re thus not contemplating leaving the party.

“However, if they eventually refuse to do the bidding of the majority, whatever comes of it they will be solely responsible,” Bolarinwa added.

He wondered why the national leadership of the party want to disenfranchise over 80 per cent of members of APC in Kwara from taking part in the congresses.

“Why is the national leadership of the APC hell bent on sending almost 80 per cent of its membership strength out of the party? What do they stand to gain?

“Isn’t that a subtle way of encouraging party members to find abode somewhere else?

“I want it to be on record that if mass exodus or implosion should hit Kwara APC, Buni and his people should be held liable.

“This is a party Kwara people built with their sweat, yet some few people are taking them for granted.

“The national leadership of the party is toying with Kwara, we’ve told them the reality on ground, but they appear not to be interested in sincerely addressing the genuine grievances of majority of party members, all in the name of solidarity with their colleague,” Bolarinwa noted.

The get together was also attended by chieftains of the party, local government chairmen and members of the state caretaker committee members.

2023: Will Amaechi Be Tinubu’s Albatross?