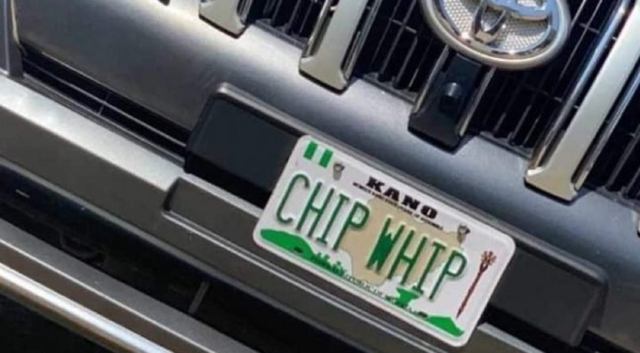 The Federal Road Safety Corps (FRSC) and the Department of State Services (DSS) has track down the producers of the fake ‘chip whip’ and other fake number plates in the country.

The Corps Public Education Officer, (CPEO) Mr Bisi Kazeem, disclosed this in a statement made available to News Agency of Nigeria (NAN) on Saturday in Abuja.

NAN reports that the Corps Marshal, FRSC, Dr Boboye Oyeyemi, had ordered investigation into a particular plate number in Kano.

The number plate has the inscription of “Chip Whip” purportedly for a member of the Kano state House of Assembly.

Kazeem said that both agencies have apprehended some syndicates in Kano and Kebbi states in connection with the production of illegal number plates including the fake Kano ‘Chip Whip’ number plate.

According to Kazeem, upon sighting the illegal number plate, the Corps Marshal, Dr Boboye Oyeyemi immediately directed the Kano state Sector Commander, Mr Zubairu Mato, to collaborate with security agencies to fish out the syndicates involved in producing fake number plates in the state.

“Consequent upon the directive, DSS Kano State was intimated and immediately swung into action to arrest the perpetrators and bring them to book.

“At Sabon Gari, a suspect was arrested and subsequently charged to court for production of fake number plates.

“The suspect was apprehended while digging the ground to hide the illegal number plates in his possession to evade arrest,” he said.

Kazeem noted that in a similar operation, the Corps arrested some syndicates at the Dodaru market, Gwandu Local Government Area of Kebbi state who specialise in selling illegal number plates to motorcyclists.

“The Corps Marshal who expressed satisfaction over the fruitful synergy thanked the Director General DSS, Mr Yusuf Bichi, for the prompt professional response deployed to arrest the perpetrators of this high level of illegality.

“He therefore called on all Nigerians who have vital information about any individual involved in the illegal act to provide such to the Corps for necessary actions.”

Police Arrest Uncle, One Other After Kidnap Of 4-Year-Old